In 2006, work begun on a comprehensive set of strategic policies and plans for the development of Abu Dhabi. The plan was unveiled to the public in 2007 and received great feedback and praise from the local and international urban planning and policy making communities. The aim of the Abu Dhabi Vision 2030 is to develop a sustainable development plan for to accommodate for the expectedly high levels of population and immigration growth.  The Vision 2030 provides a general statement of direction and vision which is supported by individual government entities’ strategies. One of the 2 most extensive and important of these is the Abu Dhabi Economic Vision 2030 developed by the Abu Dhabi Council for Economic Development (ADCED) which is focused on building a sustainable and diverse economy to support long term growth and economic prosperity. The second major component of the Abu Dhabi Vision 2030 is the Abu Dhabi Urban Planning Vision 2030 from the Abu Dhabi Urban Planning Council (UPC), which was developed to design the urban landscape of Abu Dhabi including land use framework, infrastructure design, transportation in an environmentally and economically sustainable manner.

The initial projects for tram and metro systems in Abu Dhabi have fallen behind schedule according to the Abu Dhabi Vision 2030. The Department of Transport’s current plan is for the tram and metro system to be delivered in 2017 and be fully operational in 2020. The metro will cover a distance of 130 km and the tram lines will cover 340 km across Abu Dhabi. The total investment is estimated to be $7bn and is part of the Surface Transport Master Plan that was designed and planned by the Department. The metro project’s first phase will run from Zayed Sports City and Al Mena through a mostly underground route and will include 17 stations, or stops, along the way. The first two tram lines will transport passengers between the Marina Mall and Reem Island as well as Saadiyat Island. The Department of Transport has contracted with the best global Project Management Consultancies, transport planners, and Design Engineers on this project. The first tenders for the project implementation are due to be awarded in 2014.

The “Estidama” program was born in 2010. It was initially introduced as a policy program that encouraged and pushed developers to abide by a code of values and conduct for environmentally sustainable construction and building practices. Estidama also include a rating system that has been called “Pearl”. All new projects including mega developments and individual buildings must comply with the framework that ensures measures are taken to install sustainable technology and design principles. The Pearl system is similar to the LEED system that is used in Europe and North America but has been tailored to the local environment and conditions. 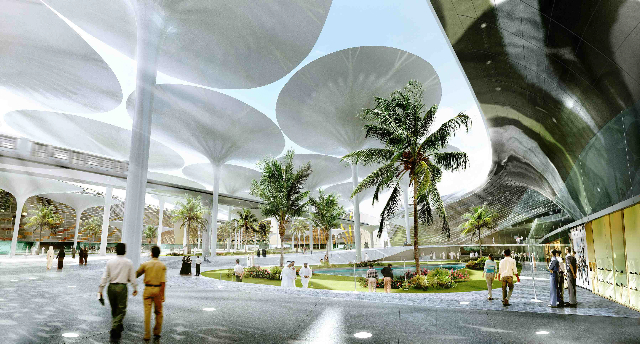 One of 2 most significant elements of the Abu Dhabi Vision 2030 is the Urban Planning Council’s Plan 2030. A key facet of the plan is the concept of created or improving Abu Dhabi’s land use, effectively creating distinct districts or zones across Abu Dhabi including:

Masdar, the Abu Dhabi Future Energy Company owned by Mubadala has made progress towards the creation and support of an environmentally friendly and sustainable capital. Below are the four main components of Masdar with a short summary of achievements to date:

Unfortunately though, Masdar has had to scale back some of its activities in the global economic slowdown, Masdar City in particular has lost some of its initially planned elements and has experienced a considerable slowdown in the pace of building.. But it’s still a significant force for the future, and the 100MW capacity means Shams 1 will contribute significantly to Abu Dhabi’s energy needs (Shams 2 and 3 should follow).

The recently opened Khalifa Port and Kizad industrial zone is likely to be an important source of growth for the Emirate.  It is one of the largest combined port and industrial zone developments that employs the most advanced and state of the art technology available in the field today. Abu Dhabi’s General Holding Corporation, the UAE’s largest industrial conglomerate, has invested heavily in aluminium and other key sectors. Kizad is sure to attract some of the largest local and international manufacturing, logistics, and trade companies with its low cost operating incentives, strategic location, and amenities in the coming years to make it one of the largest industrial zones in the world.

The other areas for government investment in the next five-year period are media, health care, petrochemicals, aviation, and financial services. Media Investments have increased tremendously over the years to include the development of 2454, Abu Dhabi’s main Media Free Zone which hosts big local and international media companies. In Health Care, Health Authority Abu Dhabi, SEHA, and many other joint ventures in the capital have contributed to substantial developments and improvements in health care. Today, everyone in Abu Dhabi has access to medical treatment as mandated by the law. New disease prevention and treatment policies have been enacted and implemented, reducing risks of disease outbreaks and contagion. The quality of medical insurance and public health care services have improved and expanded dramatically. Flagship projects have been delivered that have put Abu Dhabi on the global map for quality public and private health care including the new Sheikh Khalifa Medical City, the renovated Mafraq Hospital, and the new Cleveland Clinic on Sowwah Island to mention a few. Government investments in petrochemicals, aviation, and financial services have also taken place and continue to drive growth and economic diversification as well. All of the areas described above have seen dramatic improvements and change, driven especially by value-driven public-private partnerships.