Education in Abu Dhabi has gone through a period of major growth over the last few decades.What started out as a small-scale state education system has now grown into a world-class education system having large numbers of public and private schools, as well as world class Universities and tertiary institutions.

The Abu Dhabi Government has identified education as its number one priority. It has further recognized the role of education in achieving long-term social and economic transformation in Abu Dhabi. This shows the importance that is placed on education and further illustrates the important role that the Abu Dhabi Education Council(ADEC) has in fulfilling this strategic priority.

Under the visionary leadership of H.H Sheikh Zayed bin Sultan Al Nahyan, Founder and late President of the UAE, public education in Abu Dhabi and the UAE as a whole saw rapid transformation through policies, agendas, and frameworks set by the Ministry of Education.

His Highness Sheikh Khalifa bin Zayed Al Nahyan, the current premier of UAE and Abu Dhabi, continues to stress the need to further develop the education system in Abu Dhabi according to international standards. In order to achieve that goal, ADEC was established in 2005 to improve the quality of the public education system in Abu Dhabi. The Chairman of ADEC is H.H Sheikh Mohammed bin Zayed Al Nahyan, Crown Prince of Abu Dhabi and Deputy Supreme Commander of the UAE Armed Forces. The Vice-Chairman is H.H Sheikh Mansour Bin Zayed Al-Nahyan, Minister of Presidential Affairs.The Director General of ADEC, H.E Dr. Mugheer al Khalili, has administered ADEC since 2005.

ADEC has pledged an unwavering resolve to transform Abu Dhabi into a knowledge-based society and has charted progressive, sustainable plans to carry this out by way of the Education 2020 Plan,launched by the Ministry of Education and Abu Dhabi Economic Vision 2030.

When the UAE was established in 1971, there were very few educational institutes in Abu Dhabi. In 1962, Abu Dhabi had less than 20 public schools with an enrollment of about 4,000 students, most of them boys. There were no higher education institutes in Abu Dhabi. Citizens who wanted to study beyond secondary school had to go abroad to complete their studies. Today, that number has grown to 490 schools—185 private and 305 public. In addition, Abu Dhabi has 18 higher education institutes and universities of which 12 are public and six are private.

ADEC’s role is to develop and manage public educational institutes within Abu Dhabi. It also offers support and assistance to private schools and universities and implements policies to improve the standard of education in Abu Dhabiin accordance with the highest international standards.

At present, ADEC manages 305 public schools and 12 public HEI (Higher Education Institutes). Public education is free for male and female citizens through university level. Expatriate students can also attend government schools for a nominal fee. Public institutes and schools in Abu Dhabi have one of the lowest student-to-teacher ratios (28:1) in the world, enabling the average student to receive more attention from his or her teacher.

Thousands of teachers from around the world have been recruited over the last few years in an effort to further transform the public education system in Abu Dhabi to meet some of the best international benchmarks available. In addition to teaching at the public schools, these recruits are tasked with supporting local educators in developing the best teaching techniques and methodologies in addition to supporting them with the development of long-term professional development plans. At the end of 2014, ADEC announced that approximately 1,500 Emirati school leaders, teachers, and administrators had been recruited across Abu Dhabi’s public schools as part of ADEC’s strategy to Emiratize school based jobs. In addition to their new positions, Emirati school leaders will be offered various professional development opportunities that will help empower them in the field. Some of these opportunities include a scholarship program especially tailored for school leaders, the Nibras Program, the Florida Program to help assess and develop their performance, and the Vanderbilt University Program which will offer developmental and career guidance support.

The stated mission of ADECisto produce world-class learners who embody a strong sense of culture and heritage and are prepared to meet global challenges. In order to achieve this goal,the role of the Council was expanded further. It now coordinates with the Ministry of Education to plan education strategies within the framework of the UAE’s general education policy, provide technical and material support to public educational institutions as well as staffs, implement innovative educational development policies, and support research-based techniques to increase student performance and learning. ADEC also conducts studies and makes suggestions to develop education and vocational training, initiates plans and programs to improve the education system in Abu Dhabi, and supports relations between public educational institutions and the private sector.

ADEC seeks to put students first and create a modern and innovative school system for all citizens and residents of Abu Dhabi. It endeavors to develop educated and responsible citizens that will shape the future of Abu Dhabi.This commitment has been made evident by the numerous initiatives and transformation projects that ADEC has championed since inception.

ADEC targets both fundamental long-term transformation and immediate improvements of the education sector. The reform plans announced by ADEC are aligned with the federal education strategy aimed at enhancing quality and competitiveness of education in the region. Its vision is to build an oasis of knowledge and research in Abu Dhabi, strongly connected to the global society and economy, and yet deeply rooted in the culture and heritage of the Emirate.

In 2008, ADEC created the Abu Dhabi Education Policy Agenda. The educational agenda was created in coordination with over 44 world experts on education. The goal of the agenda was to create a framework of guiding principles, objectives, and a vision for improving the quality of Abu Dhabi’s education system.

Most of ADEC’s initiatives not only identify policy priorities but also make policies that are unique to the region. For instance, the new school model program described above focuses on the student, the teacher, and the learning environment rather than focusing specifically on books.

The policies of ADECaim to optimize geographic distribution of schools for improved accessibility by the residents of local communities.Further, its goal is to provide access to high quality education to everyone in Abu Dhabi—education that is on par with the highest international standards. The standard of Emirate’s education plays a defining role in successful implementation of Abu Dhabi’s policies, agendas, and framework.

As mentioned previously, Abu Dhabi currently has more than 200,000 students studying at 185 private and 305 public schools across the city. One of the key goals of ADEC that is in line with Abu Dhabi Education Vision 2020 is to build –sixty to seventy new schools in the next five years.

By 2020, the number of students in private schools is expected to grow to around 280,000. The new schools that will be set up under the guidance of ADEC will effectively meet the growing demand for educational institutes in Abu Dhabi. 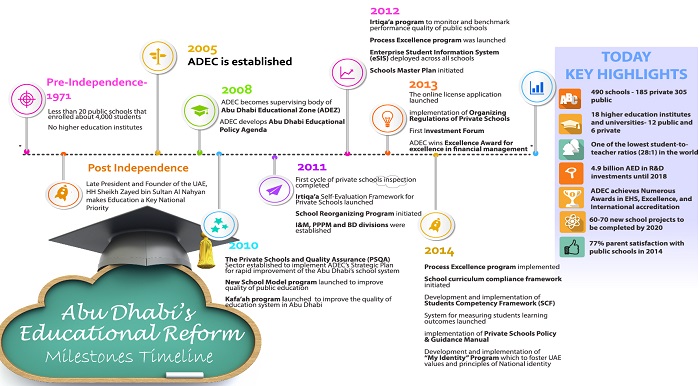 Apart from increasing the number of schools in the city, other key priorities of the Council include staying abreast of global trends in education delivery, upgrading existing information system infrastructure and backend support systems, and introducing new ideas and technologies to meet the needs of the learner community. In addition, ADEC is also keen on enabling advanced information dissemination, harnessing students’ technological prowess, and improving stakeholder communications through the use of various cutting-edge channels and technology.

In an attempt to push technology-based learning at school level, ADEC announced the distribution of 11,000 digital devices (such as tablets, computers, electronic whiteboards, video conferencing materials, etc.) among public schools in Abu Dhabi during the academic year 2012-2013. Meanwhile, the government, in alliance with its national telecom company, has facilitated wired and wireless high speed internet connectivity linking over 268 public schools in Abu Dhabi at a cost of US$ 90 million.

Investing in the Future: Challenges and Concerns

ADEC’s vision is to offer a world-class education system to support the development of a knowledge-based society that will fully participate and contribute to Abu Dhabi’s current and future economy. The Council wants to enhance the quality of education imparted to the students by utilizing state of the art, 21st century learning materials. In an effort to encourage participation and transparency in seeking solutions to Abu Dhabi’s education sector challenges, ADEC has recently hosted a forum titled “Shaping the Future” where over 1,200 public school educators discussed various challenges and successes in the education sector. Teachers and staff brainstormed ideas and solutions related to 30 different topics from education reform to strategy development and project plans that affect public education today and in the future.

One of the known challenges to building a modern, world class education system is physical plant infrastructure. Some of the older public school infrastructure needs to be upgraded to provide high quality education using cutting edge technologies. However, an aggressive timeline and the complexity associated with deploying new infrastructuremay pose a challenge to ADEC in upgrading facilities of public institutionsso that they are on par with international standards. Major challengesto incorporate new technologies in public education institutes may include the deployment of education solutions for developing world-class learners, ensuring the connection and collaboration of 305 public schools to the data center, the Internet, and each other, and successful Implementationof solutions by all parties in a timely manner.

In order to solve these challenges,ADEC has partnered with leading IT firms to deploy innovative technologies in public institutions in Abu Dhabi. For example, it has deployed the new borderless network architecture that supports voice, data, and multimedia services that can be scaled to support future growth.

ADEChas alsoplanned migrationof outdated public school curriculum to a new school model with a new curriculum and assessment scheme. ADEC has proposed short and long-termstrategies to upgrade the curriculum in stages within the next two years that will start with kindergartenand go up to P-12 in Abu Dhabi.

The government believes that a poor grasp of English is one of the main employment barriers for UAE nationals.In order to solve this problem ADEC intends to introduce an English syllabus in most of its universities. It alsointends to recruit more western teachers in public institutions to help improve the English language skills of the students.

Furthermore, ADEC has secured funding of about AED 4.9 billion that will be pumped into research and development by 2018 under a new strategic plan for higher education.

Education in Abu Dhabi has grown significantly over the past ten years due to the initiatives of the Ministry of Education and ADEC. With the intention of establishing sixty to seventy new schools by 2020, as well as an agenda of improving the quality of education in Abu Dhabi on par with world-class international standards, ADEC endeavors to make Abu Dhabi one the leading destinations of quality education in the world.