The Emirate of Abu Dhabi has one of the best health care systems in the world that encompasses a comprehensive range of health services through which all UAE residents are covered under health insurance plans. It consists of an open system for all certified health service providers,and delivers top quality care in compliance with high international standards.

According to a World Bank report, Abu Dhabi is one of the leading medical destinations in the region and is renowned for dispensing high standards of medical care.

Providers of health services are independent, predominantly private, and follow the highest international quality standards. As of the last published survey in 2012,there were a total of 5,528 physicians, 969 dentists, 12,375 nurses, 4,319 allied health professionals and 1,993 pharmacists working at 1,508 licensed facilities in the capital. These facilities include 39 hospitals,540 health care centers, 316 clinics, and 454 pharmacies located in Abu Dhabi.

With an ever-increasing population, the health industry in Abu Dhabi is also set to expand significantly over the coming five to ten years. The responsibility of managing and overseeing the development of the health sector in Abu Dhabi rests with two government authorities:

These two independent governmental agencies are continually striving to upgrade the quality and standards of the health system in accordance with Abu Dhabi Vision 2030, launched in 2007 under the patronage of H.H Sheikh Khalifa bin Zayed Al Nahyan, President of the UAE and Ruler of Abu Dhabi.

Roles and Responsibilities of the Authorities

The key functions of the authority include:

At the strategic level, HAAD ensures best practices in the health care sector and is responsible for overseeing that stringent medical practices are maintained and patients receive proper medical treatment. Coping with a rapidly expanding population, this responsibility is of paramount importance and requires the development of a large infrastructure and health care program.

Main responsibilities of SEHA include:

Sheikh Khalifa Medical City (SKMC), managed by Cleveland Clinic, serves as the flagship institution for SEHA‘s healthcare system. SKMCwas created in 2005 as a result of the merger of all public health organizations in the capital. The health institution provides comprehensive health care services that cater to the needs and priorities of the community.

Evolution of Public and Private Health Care in Abu Dhabi

The healthcare system has seen tremendous growth in the past few years, with a strong demand for quality services to combat increasingly new diseases; especially those associated with lifestyle.

What started as a simple public health service has quickly transformed, but also systematically developed into a world class health system where top quality care is assured. In 1970 there were only seven public hospitals.That figure has now grown to 12 hospitals that accommodate 2,644 beds.

With a steadily increasing population, there was a clear need for additional health care facilities in the region.This need was filled by the private sector in Abu Dhabi. Private clinics via investors saw this as an opportunity to provide paid, high-level health care. In part, this was also introduced as private health insurance was tied into many expatriate employment contracts which, in turn, financed the growth of private health care.

Through these investments, private health care has grown tremendously, with facilities offering top notch medical treatment encouraging a steady stream of visitors from abroad seeking all types of medical treatment in the capital.

Strategic Goals and Key Priorities in the Health Sector

The growth of the medical sector is dependent on large investments in technology, which Abu Dhabi is in a position to make. Abu Dhabi’s health authorities and service providers, in conjunction with the Abu Dhabi government leadership understand the importance of attracting the world’s best healthcare institutions. This is a key component of the government’s health policy.

HAAD has initiated a number of majorimprovement initiatives in the healthcare sector. The first of these was the provision of lifelong care for UAE citizens and residents allowing access to all types of healthcare services, with particular emphasis on medical issues specific to Emiratis. A drive to ensure quality and safety and enhance patient experience is the second on the list of priorities. Attracting and maintaining a knowledgeable and talented workforce is also central to the execution of HAAD’s strategic plan and involves encouraging research, innovation, education, and training in the field.

At a macro level, priorities also include emergency preparedness in the event of a major disaster or pandemic outbreak and a public health approach to wellness and prevention. The latter includes community initiatives to enhance wellness and awareness. Most of us have seen the recent “Say no to tobacco” campaign” as well as the “Flying Angels” drive targeted at improving child passenger safety among residents. Such campaigns are instrumental in raising awareness and promoting safe and healthy lifestyles.

In addition, one of the biggest changes proposed over the next five years is moving towards a world-class paperless health care e-service system in the capital.With the health system going through major growth and increasing the pressure on existing facilities, resulting in longer waiting periods, a paperless e-service system has the potential to improve customer service performance by up to 80%. Additionally, this improvement in customer relationship management also has the potential to reduce costs and improve services.

Challenges and concerns in the Health Sector

As Abu Dhabi continues its economic development, it has begun to experience certain lifestyle problems such development often brings with it.According to New York University, Abu Dhabi’s Public Health Research Center, The Emirate of Abu Dhabi is confronting major public health challenges in tobacco use, obesity, diabetes, and cardiovascular diseases. In 2012, it was reported that 36% of the adult national population were obese—33% males and 38% females—while 21% of the adult population suffer from diabetes,split 22% between males and 20% females, ranking the rate of diabetes in Abu Dhabi one of the highest in the world. The Center has begun to conduct the first cohort study in Abu Dhabi which is expected to provide unique and substantial evidence for both lifestyle and genetic determinants of common diseases in the Abu Dhabi population.

Keeping up with the rising demand for health care facilities due to the rapid increase in population,estimated to exceed five million by 2030, has become one of the greatest challenges to the health care system. Currently, the population is just over 2.3 million and is growing at a rate of around eight percent per year.The vast majority of this growth is due to the influx of expats who make up approximately 79.6% of the total population as of 2013. In a 2012 survey, it was recorded that there were 4,226 operational hospital beds in Abu Dhabi. However, health officials announced that a further 1,300 would be needed by 2021 were Abu Dhabi to meet the growing demand for in-patient care. In addition to this, between 1,200 and 1,700 additional doctors would be required to treat the increasing number of patients over the coming years.

The other concern is controllingpossible outbreaks of infectious diseases. MERS and the latest Ebola threats had been identified in the past, and are still considered,as serious concerns according to HAAD. Since Abu Dhabi has become a major business and tourist destination as well as a significant transit hub in the region, such an outbreak could be difficult to control and preventive measures will always be a top priority.

Due to increasing life expectancy, rapid population growth, and growing affluence, the UAE’s healthcare technology sector is set to experience considerable expansion in the next five years.The scale of the ongoing projects in Abu Dhabi is unprecedented in the region’s healthcare industry.

Public sector investment in the health care sector is expected to grow to more than Dh12 billion this year. Many new mega hospitals are being opened both in the public and private sectors. For example, design and enabling works have been completed for the new 745-bed Mafraq Hospital and the 687-bed Al Ain Hospital. Also planned are replacements or enhancements to existing facilities such as Tawam Hospital, Al Sila, and Al Ghiathy.

Upcoming Mubadala Healthcare ventures include the recently delivered Cleveland Clinic Abu Dhabi, a multi-specialty hospital built in partnership with top US-based Cleveland Clinic, which is currently phasing in its 30+ complex and critical care specialties with the goal of being fully operational by 31 May 2015.

With a large percentage of the population overweight and either having or being at risk of type two diabetes, there are a range of programs that are being run by HAAD, with the two major programs focusing on exercise and healthy eating. These are also being looked at in conjunction with creating a more walk-friendly urban infrastructure and also the development of bicycle paths and facilities.The UAE government also plans to remove all “junk” food from school canteens and provide healthier alternatives, an initiative that has already been adopted by several schools across the Emirates. 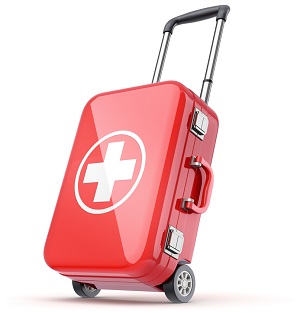 The goals for the growth in new mega hospital projects in Abu Dhabi is twofold; firstly, to manage the increasing demand of health institutions in the capital, and secondly, to promote medical tourism by attracting patients from around the world. Major global companies and brands including clinics, healthcare IT and equipment companies, and private healthcare providers have already started flocking to the Emirate to take part in this lucrative and fast growing industry.

In summary, there has been a paradigm shift in the health industry over the last two decades, which subsequently has spurred great changes in the regulation of health care facilities. New legislation and regulations are in place to ensure that local standards adhere to international best practices. Further, a number of measures and incentives have been introduced to attract foreign direct investment to create a thriving private healthcare economy.With the current five year strategic plan looking to further build the health industry, it is likely that Abu Dhabi will become a medical hub for the region, further fueling economic growth and diversification away from oil and gas.