Drones: An Analysis of UAV Technology

An Unmanned AerialVehicle, or UAV, is a remote-controlled unmanned aircraft. The first such remotely controlled flight took place in 1916. However, today’s modern UAV technology can be traced to the 1970s.

The concept of carrying out aerial military operations beyond international boundaries without having to risk pilots attracted significant attention from many governments. As a result, the technology was heavily militarized and used in warfare. Today, though, UAV technology isn’t restricted to only military usage, but also offers incredible potential for commercial and other non-governmental use.

Due to technological advancements in the technology, drones have started to shed their perception as purely war tools and are now being considered as a game changing technology in every other sector, similar to automobiles or computing. Due to the incredible improvements in GPS, digital camera, computing,wireless communication, and battery technology, commercialdronesnow offer businesses unrivalled advantages in terms of efficiency and a broad range of applications. They are now used in geophysical surveys, forest protection, communications, and various other ways. 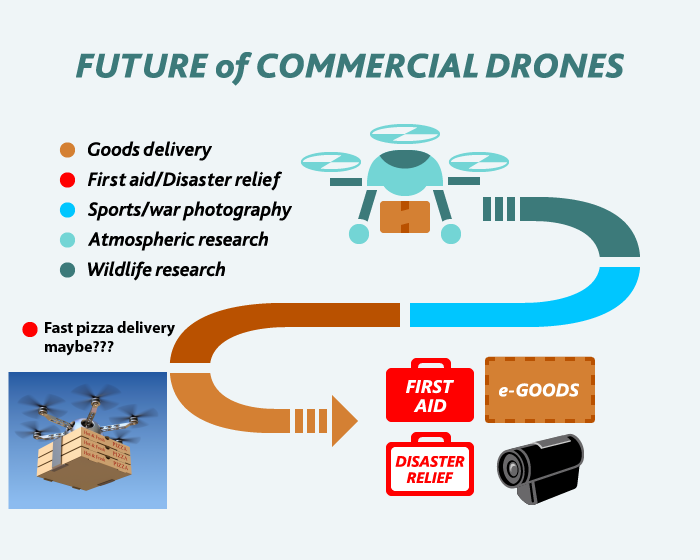 The application of drones in agriculture deserves special mention due to the various merits and amazing potential to transform the economy by reducing costs and improving efficiency. Instead of farmers surveying the land on vehicles, they can use drones to survey from the air. The bird’s eye view of the land helps in shortening the process and saving one of the most precious resources: time. Furthermore, an agricultural drone is capable of spraying crops from a height of two to three feet above ground, resulting in more targeted application and less loss due to the effects of wind.

The agricultural use of drones can be segregated into two broad categories. First, equipped with the proper sensors, they can be used for remote sensing of disease or general health problems, look for areas of problem hydration, and gather data with which to chart growth and identify problems early in the growing season. Agricultural managers can then use this information for precise targeting of remedies, potentially using less of the remedy and reacting more quickly, improving or even saving crops. Second, drones can be equipped for application of fertilizers or herbicides and apply the same precisely when and where needed, possibly resulting in the use of fewer chemicals and lesser quantities.

UAV technology possesses inherent surveillance qualities, making it a highly cost effective and productive surveillance technique. The technology can be used for the surveillance of electrical infrastructure, pipelines, road conditions, etc. Surveying large land areas using ground transportation is extremely time consuming and arduous. A better solution was the use of helicopters, but this is expensive and poses risk to human life. By using drones rather than surface vehicles or helicopters, environmental disruption is reduced, capital and expense costs are far less, and there is no risk to life.

Smaller hand launched drones have been developed which are equipped with sensors capable of detecting life, an application which is proving to beextremely helpful in disaster management and relief operations. Whether it’s monitoring or reconnaissance of disaster-affected regions or delivering relief articles to affected populations, drones have proven to be the optimum technology in every way.

Drones offer incredible versatility and arewell suited for ad hoc situations, a prime consideration in disaster-struck regions. Natural catastrophes such as earthquakes or floods can impact a large area which can be difficult to survey. Aside from providing relief,drones can also be used in the prevention of disasters such as floods. Water levels can be observed in disaster prone areas and seasons to detect early warning signs of impending disaster so authorities can formulate and implement a disaster prevention strategy.

Drones can assist in the exploration of oil and minerals extraction by using them to acquire information about the region and build 3D models of the terrain. Remotely piloted drones, due to their size, relatively low cost, and inherent versatility can obtain data not available to surface exploration or even helicopters.Specifically, mapping of terrain from a low altitude is easy and safe. The use of drones in exploration for precious metals, coal, and oil is already becoming commonplace.

Even though satellites cover huge areas at a time and photo resolution can be astounding, drones can be used to acquire an even more detailed view of the region in question. Changing the operational program of a satellite is extremely restricted and only relatively minor options are available for those already in orbit. Unlike satellites,drones can be retrieved, upgraded, and re-tasked at will. Their sphere of operations is virtually unlimited and their automated GPS-generated flight pattern can be changed quickly and at a very low cost.

Drones can also substitute for communication satellites, which tend to function at far below maximum effectiveness in poor weather conditions. Because drones fly at lower altitudes, their signals are less likely to be distorted due to weather conditions. Drones can also be used in weather forecasting and journalism, as they can gather on-site information and provide live data feeds from the scene.

There are some missions where a drone is the only safe and effective option. Consider, for example, a hurricane tracking mission, where any alternatives to a drone would be unable to safely penetrate through icing conditions, lightning, and strong wind shears. With current drone technology capacity, we can build rugged platforms to withstand the most severe weather conditions, producing a truly all-weather aircraft for remote weather analysis.

A Belgian engineering graduate, Alec Momont has unveiled a drone he calls the Ambulance Drone that can deliver first aid equipment and even has a defibrillator attached to it. People suffering from cardiac arrest must receive immediate medical attention. Even a very slight delay in response time can drastically reduce theirchance of survival. The ambulance drone can substantially reduce response time, significantly increasing the survival chances of people in need of immediate medical attention.

The ambulance drone functions via tracking mobile calls and standard GPS protocols to determine the exact location of the caller. The drone has a microphone, speakers, and a camerathat can be used to provide basic verbal assistance to the distressed caller to stabilize or revive the victim.

As Drones are experiencing an increasingly rapid adoption rate commercially, film makers and photographers now have a wonderful new addition to their filming arsenal. The new platform offers increased versatility in terms of creativity, which would previously not be possible. These drones are GPS stabilized,and so are easy to fly and perfect for the average user.

Given their usefulness and relative low cost, it is not surprise that the usage of drones in Hollywood has also already been approved by the US Federal Aviation Administration. To date, six different film and TV production companies can now utilize a UAV for filming purposes. This will further facilitate the adoption of drones in other commercial ventures.

January 12th 2015, Abu Dhabi – At the government summit in February 2014, the UAE Government announced the Drones for Good Award, which was dubbed as the World Cup of Drones. The initiative will highlight the positive aspects and the incredible humanitarian potential of this technology.

This year’s winner of the international competition is Patrick Thevoz, creator of Flyability, the world’s first collision resistant drone for search and rescue. Designed for the disaster relief sector, Flyability is asmall, lightweight drone which has the unique capability of being able to collide with obstacles without losing stability and of being safe to fly in contact with humans. It has the unusual ability to squeeze into tight indoor spaces and search for potential disaster victims thanks to its geodesic exoskeleton design

The national competition is open to all UAE citizens and residents, including anyone who is working, living, or studying in the country and is open to individuals, teams, and non-governmental entities. The competition is held in three different phases: open call, semifinals, and finals. The winner of the competition receives 1 million AED. 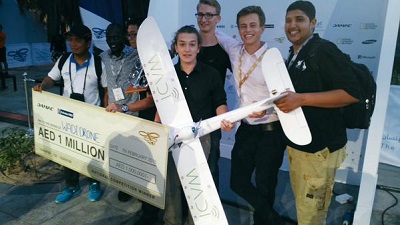 The winner of the 2015 National Drone Award is the New York University Abu Dhabi for their creation, the Wadi Drone. The Wadi Drone was designed and built to document the vast diversity of the UAE’s wildlife by gathering images of different Wadi’s flora and fauna. The 2.2-kg drone can fly for up to 40km around the WadiWurayah National Park, the UAE’s first mountain protected national park, and collects data from 120 camera traps that capture images of wild animals at the park. 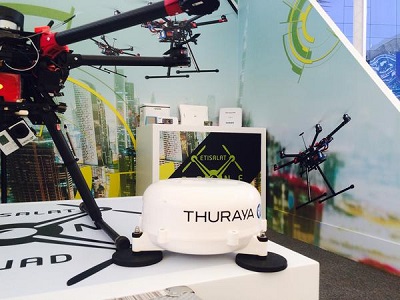 The initiative taken by the UAE government has been acclaimed globally, as it will significantly help to improve the negative association of drones with militarized war machines. Furthermore, it will provide talented individuals with a platform to voice their innovative ideas. The initiative has been considered as a good step towards a better tomorrow.

The 2015 winner in this category is Etisalatfor their Etisalat Network Drone. Designed to support logistics and disaster relief, the Etisalat drones can instantly extend network coverage; critical in times of emergency. The drones can be used to save lives by providing connectivity to remote locations such as off-shore oil rigs or ocean vessels. Connected through Thuraya network, the drones extend GSM coverage and enable people to use their existing mobile phones in the most critical conditions. The drones can also deliver high-grade medical diagnostic tools to emergency sites, enabling non-medically trained individuals to administer basic medical procedures and, under real-time supervision from doctors connected wirelessly to the emergency site from the hospitals, remotely execute life-saving procedures in real-time.