The potentially transformative effect of e-commerce upon government institutions and agencies has been a widely recognized concept. With the increase in the number of public sector online initiatives, e-government is becoming an integral component of e-commerce. 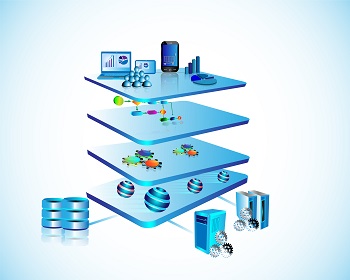 Traditionally, governments encouraged e-commerce development primarily through rules and regulations that were aimed at regulating online business activities and initiatives by private sector organizations and agencies.

In order to improve communication between consumers and governments and to facilitate technological learning, building an infrastructure capacity is of utmost importance. It provides a foundation for learning and innovation while enhancing the capability of a country to diffuse technology and absorb knowledge.

Digital government can be understood as the optimal use of electronic channels of engagement and communication aimed at improving citizen satisfaction with services delivered by the government, increased economic competitiveness, fostering new levels of trust and engagement, and increased productivity of public services.

A digital government covers the full range of digitalization – from the core digitalization of public services to the digital infrastructure, governance and processes including front and back office transformation that is needed to deliver the new service paradigm.

Whilst exploring the continuing effects of economic volatility, governments across the globe are striving to honor their promises to deliver economic growth, social progress, secure and safe nations, and to increase their own productivity.

High performance governments in our era are going digital. To ensure high levels of citizen engagement and satisfaction, governments are beginning to provide citizen-centric public service at the time and place the technology is needed.

The question that arises is:If citizens across the globe are looking to interact with a digital government, how prepared are governments to meet the rising public demand? Secondly, how aware are governments about the services and interactions that their citizens expect from them?

Even though local initiatives in the United Arab Emirates started earlier, the federal e-Government program was introduced in 2001. One of the early e-Services that was offered at the Federal level was the electronic card called the eDirham in the year 2001 that was issued to collect government service fees.

Today, UAE is considered as a country that has one of the most advanced communication and technology infrastructures. As a part of its national development strategy, the UAE government decided to own the identification process and provide unique and secure identities to its citizens. An identity management system of this level is intended to offer improved security, obtain higher levels of trust and confidence, and enhance citizen participation.

United Arab Emirates is considered one of the highest investing countries that adopt and implement progressive ICT in its government and private sector. According to the UN e-Government 2012 survey, the UAE has made a remarkable achievement worldwide in the field of e-Government – one that focuses on the role of e-Government in sustainable development.[1]

Communication in today’s interconnected world is as important to us as our reliance in food, shelter, and air. The methods that are used to share information and ideas are changing rapidly and with the advancement in this technology, the creation and interconnection of networks is having a profound effect on the way we communicate and interact with each other.

As the world becomes increasingly interconnected and as internet and communication services become immediate and accessible from anywhere, businesses and individuals can communicate with each other from anywhere around the globe almost instantly.

This hyper-connectivity is acutely redefining relationships between consumers, individuals, enterprises, and governments whilst introducing new opportunities, challenges, and risks in terms of access to information and flow of confidential data. Our societies and economies, as a result of these developments, will continue to undergo transformations.

Leveraging these transformations in order to maximize the positive impacts and increase resilience against the risks that integrated communication technology can bring to the society, environment, and the economy are critical for improving economic competence and well being.

Because of the turbulence experienced by the global economy during the past few years, governments and enterprises are doing everything possible to regain momentum and promote sustainable growth. As we step into the New Year, we continue to face challenges.The impact of communication and ecommerce technologies on each industry has become far more reaching;its transformational effects expand to multiple sectors of the economy and society through the emergence of new industries in the age of connectivity.

The world economy is growing steadfast to be an economy that would be entirely based on technology and knowledge where the modern management systems will enforce the government and business organizations to develop methods for the creation of a knowledge-based economy that has become the fundamental criterion for success and excellence. (Ali Al Kamali, Managing Director, Middle East Excellence Awards Institute)

Government agencies benefit from the streamlined operational opportunities of embracing e-Government, but the citizens also benefit from, if nothing else, the simple knowledge that the information they require from their government is readily available. Governments that are making great strides in e-Government development provide citizens with an open forum to express opinions and interact directly with decision makers in real time.

The UN Department of Social Affairs, a department within The United Nations Department of Economic and Social Affairs (UNDESA), surveys its 193 member states and compiles analyses and best practices from those surveys. Progress since the bi-annual survey began in 2010 has been rapid with notable and valuable benefits to citizens. The report, titled “E-Government for the Future We Want” is available on the United Nations Public Administration Network.

The highest ranking countries in the survey have achieved outstanding results in all areas of the study and have shown marked increase in the use of e-Government facilities over the last few years. Citizens use the portals to educate themselves on the structure of their governments, acquire information about officials at all levels of their government, and can easily obtain documentation such as birth certificates and apply for permits and request other services. These portals also allow people to interact with their governments in real time. Vendors who work with governments have easier access to the order process and information concerning daily business with government departments. The availability of a wide range of information at these top-ranked e-Government portals allows for more transparency of government operations and visibility into public expenditures. These benefits of e-Government portals help to create faith and confidence in government among the citizens and even more, help government officials to be more responsive to citizen desires. 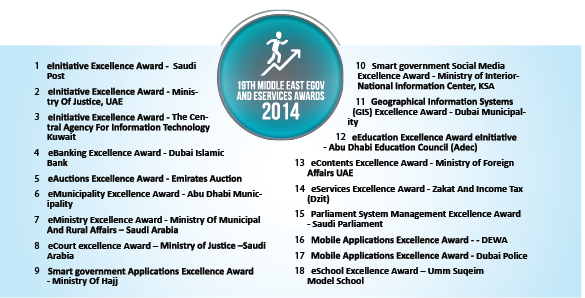 Here, in our own part of the world, The Middle East Excellence Awards Institute recognizes government and private institutions that, through their pursuit of innovation and excellence, combined with strong leadership, have contributed significantly to the growth and development of the regional and global economy. (http://www.meawards.com/default.aspx) Awards for e-Government and e-Services are presented for superior achievement in areas such as overall initiative, municipal government, courts, schools, parliament system management, and government application development. The Middle East Excellence Awards Institute feels that the importance of recognition not only brings media attention to the success of the region’s economic development, but also builds credibility for the enterprise and helps to build its reputation. The recognition of excellence also serves to motivate employees to even greater commitment to innovation and creativity as they seek to improve at every opportunity.

This new age of connectivity will introduce a whole new chapter in government service and responsiveness that will be intimately linked with continued economic growth worldwide. More importantly, e-commerce and ICT will significantly reduce limitations due to geographic separation and the lack of timely knowledge.Access to information, and specifically government information will allow people around the globe to communicate with each other and share information and ideas easily and efficiently.

The convergence of e-commerce technology will be a critical part of these technological innovations. Businesses and governments have come to realize that an interconnected and integrated communication technology is critical for their growth and sustenance in the global economy. Superior e-commerce services will make our lives better and more convenient whilst delivering superior user experience.

[1]eGovernment Strategies – A case of the United Arab Emirates (UAE)