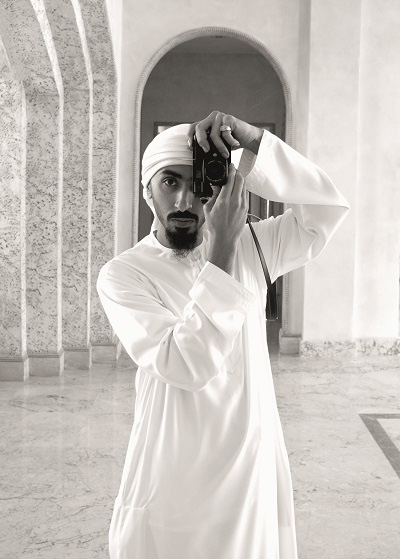 Abdulla Al Mazrouie identifies himself as a “citizen of the world”, and as his story unfolds, you’llunderstand why. At the time Abdulla was ready to make his entrance into the world in 1984, his father was studying and living in Los Angeles with his wife. His mother travelled back to the UAE where she gave birth in the family’s hometown of Al Ain,then returned shortly thereafter. As Abdulla puts it, “as soon as my neck got a little stronger, they shipped me back to Los Angeles.” There he attended pre-school and learned English, which he identifies as his first language. Although he was very young at the time, Abdulla says he has many fond memories of his time in LA where he enjoyed his early childhood and made great friends, some of whom he is still in contact with today.

Abdulla returned to Abu Dhabi at the age of six, where he was faced with the challenge of entering a public school systemthat, from his viewpoint at the time, seemed foreign. He says it was hard for him to adapt to the public school system, especially having to learn Arabic at that level. Four years later, and just when he began to get accustomed to his new life in Abu Dhabi, his family moved to Washington, D.C. where his father earned his master’s degree. During this two-year period, his father worked for the UAE embassy in Washington while Abdulla attended middle school. Once his father’s studies and mission were complete, the family moved to the United Kingdom where his father attendedthe University of Wales in pursuit of a PhD. The family lived there for two years before returning yet again to the U.S. for another three years. At the age of 17, in August 2001,Abdulla returned to Abu Dhabi to complete his high school studies just before the fateful September 11 terrorist attacks. That incident had a major impact on him as he realized that the U.S. he knew and had grown to love would never be the same, especially for Arabs.

Funny as it may sound, Abdulla recalls feeling somewhat out of place in his own homeland during the first few months after his return. “Abdulla Al Americani they used to call me. People would think I was an American or another Arab who watched too much American TV because of my American accent, style of dress, and attitude,” he says with a laugh. Although he adapted quickly and was able to make new friends easily, he found himself struggling to conform to the norms of the Emirati culture and society. “We have a beautiful culture. Emiratis are a kind, hospitable, and respectful people,” Abdulla says. “But I have experienced and immersed myself in so many different cultures in my life that I find it hard to fit into a particular stereotype or cultural image.”

Abdulla graduated from high school in 2002, initially wanting to return to the U.S. to complete his post-secondary education, but deciding that with the economic and security issues present at the time, this would have to wait.

After graduation, Abdulla knew that his passion for experiencing new cultures and learning new languages meant that he had to set off on a new adventure. “I wanted to go to a place where I would have to start from zero; Japan popped into my mind right away. Since the U.S. was now out of the question, I decided to venture to the other side of the world. I had visited Japan previously and was very intrigued by the Japanese society and work ethic. So why not, I thought. Japan it is.” He adds, “Most people try to stay within their comfort zone. I have never been comfortable in a comfort zone. I wanted to learn a new language that was going to prove useful for me, my country, and for my life—something that was my choice and not taught in a standard curriculum.” Abdulla took a three-month Japanese language course in Abu Dhabi during which he visited Tokyo to assess the possibility of moving there.

Abdulla moved to Tokyo two years after graduating to pursue a double major in digital media and political science with a focus on U.S., Middle Eastern, Russian, and Chinese politics. He says that the 9/11 attack played a major role in his decision to pursue the academic path he selected, stating that he wanted to learn more about how media can affect people and how politics can play a large role in shaping the messages we receive from commercial media channels. He refers to the response that Western news coverage provoked after 9/11 as a kind of “mass psychosis” that created animosity and caused a huge division between Arabs and the rest of the world. He asks, “Why do all Arabs and Muslims have to answer for or be made to feel responsible for the actions of a few mad men?How are the narratives used by media channels designed?I want to know more about what is going on behind the scenes and to be able to critically analyze digital and traditional media.”

Besides his core studies, Abdulla has had a passion for photography since he was 16 years old. He attended numerous courses and workshops over the years and has had the opportunity to showcase his work at galleries and exhibitions, something he describes in more detail over the course of the interview.

During his time in Tokyo, Abdulla was able to learn the language and integrate into Japanese society fairly easily, as he has done so many times in the past in other countries. He soon made many new friends and was able to meet up with like-minded individuals through university and social gatherings. Today, he speaks Japanese fluently and is learning how to write the language. “Learning Japanese was a necessity for me. I knew that if I didn’t learn the language well, I wasn’t going to get very far there. In fact,”he says, “now I am more comfortable speaking in Japanese than in English. Sometimes speaking in English can actually be irritating, as I cannot express myself as well as I can in Japanese.” When asked what Abdulla thought of the Japanese people and culture, he says, “Once you open up to them, they open up back. They are very humble, respectful, and honorable people and these qualities make daily life in Japan much easier. You are not in conflict with people over insignificant issues. People have a strong sense of self-awareness and self-discipline and this keeps a natural sense of order in Japanese society. People work hard and service quality is a matter of honor.” Abdulla sums up his view of the orderly Japanese society by referring to a proverb commonly used in Japan: “The nail that sticks out gets hammered.”

Abdulla’s first major opportunity to explore his creative talent came in the form of an idea to make a short film with a few new friends who shared his creative passion. With a target production budget of 80,000 USD, the team set out to get funding. They posted their project on Kickstarter.com, the world’s largest funding platform for creative projects in film, art, theatre, games, design, and photography. “Our main goal was 80,000 USD, but we were able to raise 114,000 USD, a sum to be used primarily for visual effects.” Five years later, Abdulla’s baby is ready for the world to see. He describes this experience as one of his proudest accomplishments. With a small team, a relatively small budget, and a semi-professional Hollywood film crew, Abdulla was able to create something truly amazing. The short film held its first official screening in Los Angeles in October 2014 and the trailer is now available online at www.dustthefilm.com. Abdulla and his team now hope to introduce “Dust” to other countries and international film festivals. Since the screening, he and his team have been approached by large multinational companies including Microsoft and media production companies including Fox Searchlight and Warner Brotherswho would like to turn the short film into a full length feature and even a video game!

It seems Abdulla is quite the busy fellow. Between juggling his film production ambitions and pursuingthe master’s program in media and governance at a Tokyo university, he somehow still finds the time to fit in his commitments as an intern for the UAE Embassy in Tokyo. He says that serving his country in any way possible has always been one of his biggest priorities. Abdulla’s role with the UAE embassy involves creating and designing art galleries and exhibitions aimed at building and strengtheningthe “culture bridge” between the UAE and Japan. Three years ago, Abdulla was tasked with arranging an arts exhibition for the embassy in celebration of UAE National Day. The exhibition featured a “live painting” on a two-meter wall as well as various photographs of the UAE taken by Abdulla while on one of his visits home. Ambassadors and diplomats from embassies across Japan attended the event which was seen as a great success. Another gallery that Abdulla was able to contribute to was at the Mori Building in Tokyo where all of the Arab embassies were invited to showcase their native art and culture. Abdulla says, “Even though we live in a globalized society, we are still generally quite ignorant about foreign cultures and traditions. Such events are a great opportunity to bridge gaps and improve cultural awareness among nations and people.” He says, “Art culture can always make a conversation more vibrant and is a great icebreaker that enables people from different backgrounds to connect.”

When asked what other projects are in the future, Abdulla responds, “My ten years of experience and learning in Japan has opened up a whole new horizon for me. Hamduli Allah, I feel so blessed to have had this opportunity to develop new skills and receive practical experience in a field I am very passionate about. With the support of the Abu Dhabi government,Insha Allah, I plan to bring our small production team to Abu Dhabi soon and feature our films at the Abu Dhabi and Dubai Film Festivals before going global.” He adds “If we can accomplish what we did, given the limited resources we had, imagine what we can create with the right tools and support.” Abdulla is very enthusiastic about coming home and building a world class film production studio equipped with state of the art technology and facilities. He says, “The art and media scene in the UAE has exploded since I have been gone. The UAE government provides great support to local media and production companies in its aim to create a world class media, arts, and culture hub and I want to be part of this promising new industry.”