For many expatriates, the UAE is seen as a safe and secure place to earn a good living and enjoy a great quality of life. It is generally understood that as long as you respect the local laws and culture, expats can live in harmony with the locals, but most choose to keep a comfortable distance.

However, for many of us, including our Local Enterprise interviewee of the month Omar Fouz, the UAE is home. “Many of us were born here or have lived most of our lives here. We grew up with locals, we studied together, grew older together, and work together. There is no Local/Expat divide” Omar insists.In the mid 80’s, when Omar was four, his father moved to the UAE from Sri Lanka. Born to a Sri Lankan father and British mother, Omar attended a local school in the very “local” neighborhood of Jumeirah where they were living at the time. Omar recalls fondly how he used to get along so well with his local friends in the neighborhood, even though he did not speak, “We were all kids.” He says, “We enjoyed the same things, went to the same school, and became great friends.”

In 7th grade, Omar met Qassim, an Emarati friend from his neighborhood who would soon become a lifelong fri
end and business partner in numerous ventures in Dubai. The two shared similar interests, mainly any machine with an engine, especially cars!Qassim got started early in his experimentation with entrepreneurial ventures and he would always be on the lookout for good car deals and license plate numbers. He would then buy them cheap, enjoy them for a few weeks, then sell them for a good profit.“He always had a knack for spotting value. And somehow, he would always find these great deals on random stuff” Omar remarks with a grin on his face.“I remember once, out of the blue, he called me and said: Hey Omar, you have 50,000? This guy I know wants to sell 4 brand new jetskis he doesn’t want, much cheaper than market price. I didn’t even hesitate,” he recalls fondly. “If Qassim said it was a good deal, I knew it was a good deal!”

After graduating from high school in 2001, Omar went to Switzerland to continue his education and landed an internship in Barcelona thereafter. Soon, Omar decided to return back to Dubai where he hoped to start his career- “This was a great opportunity to learn how the world works and to take back some lessons with me to Dubai” he recalls. Upon his return, Omar got into the booming Dubai real estate market. During this time, Omar reconnected with Qassim and opened up a real estate company in 2009 that would go on to manage an impressive portfolio of local properties. This would be their first official, registered company they established together.

With a Little Help from My Friends

In November 2012, the two scraped together whatever savings they had to open up a small service centre they called “Diablo Mechanics”. The shop targeted high-end car owners, offering them full service care packages that included cosmetic work and art decals. Qassim had studied Mechanical Engineering in the US and so with his background in engineering, meant the pair had some of the essential know-how required to set up a garage. Qassim understood the basics, but it came down to their love for cars and growing up in the UAE that enabled them learn what people wanted… Next, they just had to figure out how give to them!

“Learning how to run a business on our own was a huge learning curve for us” Omar says of their first foray into the start up world. “With so many factors to worry about, from HR to Infastructure, Suppliers, Purchases, and Managing Finances with a small budget, this was a whole new ball game for us!” he adds. When reflecting on how their first proper business was run, Omar says, “admittedly, we were a bit old school. Paper, cash, face to face, and phone calls were our main management tools. After our second year, we eventually managed to systemize our processes and streamline our operations.”

“It was a small start. But we had a much bigger picture in mid.” Omar reflects.“Within six months, we had grown out of our locations. We could not fulfil all the orders we were getting and had to move to a space double in size. And with this new space came more space for creativity and out of the box thinking! We rebranded as ‘Foil X’ and started experimenting with car wraps. Wraps, or Foiling, was trending at the time. People have a lot of wealth here and enjoy personalized luxury goods. So, since owning a Lamborghini is not that uncommon, what do you do to stand out? You get your car foiled! And we were always one step ahead of everybody else in terms of creativity and design ideas!”Omar recalls in an enthusiastic tone.

With a limited budget, the two knew that the majority of their money was going to go towards rent.“We had to be very careful with spending.” Explains Omar.  “We managed to get the heavy equipment on a financing plan, starting off with 3 jacks and a few essential machines for basic mechanical services and got to work! We were doing work on cars before we even had the garage outfitted!” Omar says with a laugh. “There are reputable people in the market, but there are also a lot of “cowboys” who can take you for a ride. The way I see it, if you don’t get burned at least a few times, you won’t really learn.”

“When we first opened, it was just me and Qassim” Omar expla 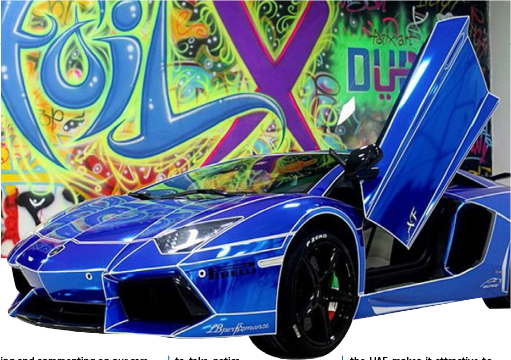 ins. “We took our employees from Diablo, six in total including a manager. A good friend of ours, Khalid, then approached us a year after starting Foil X and was interested in investing with us as a silent partner. This really gave us a big boost!” he states. “With this investment, we were able to buy extra materials and hire more staff to take on more and more projects. Just before selling off our business in June 2015, we had a total of 33 employees!”

Recounting the story, Omar goes on to tell us: “Foiling was picking up at this time, and we decided to take advantage of this. So rather than outsourcing, we decided to open up a Foiling Division with 3 designers on board and invested in a printer equipped with a laser cutter for printing large stickers and foil to use for vehicle branding. This was something that many other garages were not doing. Paint booths are expensive. But we managed to get one on instalments and began to take on small projects. Within the first year, we had so many different kinds of projects andservices lines that we had to take a step back”. But they didn’t stop there.

Omar continues, “We decided to focus on Foiling. We got rid of our mechanic works and hired more designers for our foiling services. This was a great decision as foiling was really picking up, and we were one of the first to offer high quality foiling services at great prices. When I look back now, it amazes me that we did very little in terms of marketing and advertising, especially compared to others.We did the typical ones, advertising on Autotrader, a lot of social media marketing using Instagram in particular which was a huge contributing success factor.”

Social media clearly had a profound effect on interest, and Omar tells us “People were sharing and commenting on our cars and we would see this translate into business all the time. We were getting about 1000-1200 likes every time we posted a picture. When we sold in 2015, we had 34,000 followers on Instagram!” Omar tells us how the brand grew and grew, “We initially had our brand @FoilX on some of our favourite projects, with permission of the customer, which would be then seen by these car spotters who would take pictures and upload them online and mentioning us. We even had some people ship their cars to us from oversees for a foil job, adding to the Foil X frenzy.” Inspiring stuff!

Omar attributes the team’s main strengths to their network of contacts and a great understanding of the local market. Growing up in the UAE, the two had a large network of like-minded friends. “Our friends were among the first to try out our new foil designs, and once their cars were back on the street, people started to take notice and ask about us. From there, it just kept growing and growing.”One of the biggest publicity boosts came earlier on when Top Gear contacted them to supply cars for an episode on Dubai’s luxury car lifestyle. “After Top Gear, the rest just came forward. We were contacted by Gumball 3000 (UK Based International Rally Organization) and other international brands and we were getting great local contracts as well, such as Skydive Dubai and members of the Royal Family!”Omar adds, spiritedly. 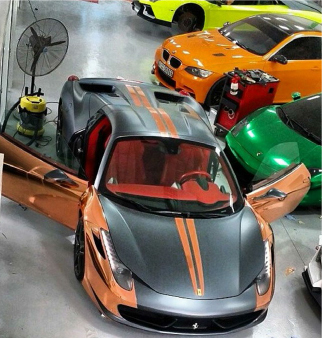 We asked Omar what he felt about the local entrepreneurial scene and what advice he had for aspiring entrepreneurs. In response, Omar gave this: “If you are starting in Dubai or Abu Dhabi, I would say that you have a lot of opportunities here that you may not have elsewhere in the world!Competition is also relatively low and the UAE makes it attractive to set up shop here. Start-up costs are relatively low and there is a big supply of affordable labour.”

“Many expatriates choose to go the free zone route when establishing a business in the UAE! However, I would definitely advise expat entrepreneurs to seriously look into working with a reliable and trustworthy local partner” adds Omar. “Working with Qassim was a great learning experience where we were able to complement each other’s strengths and weaknesses. I feel that if you look at some of the success stories of where expats have partnered with locals, you will find that many have developed great personal and professional relationship.” He leaves us with one final valuable piece of wisdom, “at the end of the day, locals know the country better than any of us. They can open doors that would otherwise be shut including huge networks of loyal local clients and supporters!”