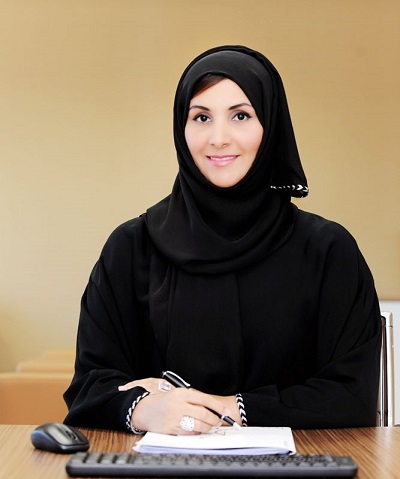 H.E. Salama Al Amimiis Executive Director of Organizational Development and Excellence for Abu Dhabi Education Council (ADEC), working on projects that will have a dramatic impact on the youth of Abu Dhabi for generations to come.

H.EMsAlAmimi is currently focused on what she says has been the most significant project of her career so far:to recruit moreEmiratis to teach in schools. This morning, she has good reason to hail this a success: “The lady who works in Emiratisation, which comes under my office, was so excited to come and tell me the good news just now, that we’ve hired 677 teachers in this campaign!

“Emiratis have tended to disregard the teaching occupation, because they believe it’s a lot of pressure dealing with students for a small amount of money. So we built beautiful schools, came up with a new pay-scale for teachers, new working structures, and it’s now making teaching more appealing to them.”

The 38 year-old Emirati started her career in Al Ain, working in recruitment for Tawam Hospital. She recalls the American General Manager of the hospitalat that time:“I had a wonderful boss who saw the potential in me—he felt I was someone who could learn quickly. He never stopped advising me to put pressure on myself, because he believed that would make me a better professional. Now, I myself am a manager. I try to do that with my own staff because you never fully realise your capabilities until you’re under heavy pressure.”

Four years later, having been promoted to head of recruitment for Al Ain Medical City, H.EMsAl Amimireceived a phone call from the General Secretariat of the Executive Council (GSEC),asking her to work for them as an HR Manager.

“When I received that phone call, I knew it would be a big step forward in my career, but to be honest with you, as a Bedouin lady it was difficult to think about shifting from Al Ain to Abu Dhabi with my young daughter, even though it’s only a two hour drive away, because I had to leave the family. But I decided to do it.”

Three years later, H.EMsAl Amimi was promoted to Executive Director of Support Services, where she was the only female executive in a team of four men, which presented its own challenges. “They were supportive, but—it’s strange, as a female, you have to be cautious of every single word that you state. Men can be very sensitive when something is spoken by a female to a male. So I had to be careful with my statements. But sometimes I used to think ‘Do you hear yourselves when you talk to eachother? Why don’t you get as sensitive towards each other?”

H.EMs AlAmimi worked at GSECfrom 2006 and 2009, during a time of great changes in the central government, and seized the opportunity to learn what she could. “It was a very exciting time to be involved in this line of work. Although I was support services director, I was always working on the business development side more than support services. I was someone sitting at the table, listening and trying to contribute.” One of H.EAl Amimi’s roles was to develop the structure and function of ADEC, so moving on to work for them seemed a natural next step, where she started as an Organization Capability Adviser. Then the Office of Organisational Development and Excellence was created, with Ms AlAmimi at the helm. “They created the office with that name because everybody believed in that mandate. We are reforming the entire system—it’s an office of transformation,” she explains.

One reason for a perceived need for reforming the system was the growing gap in expectations between the school education system andthe higher educationsystem in Abu Dhabi. Ninety-three percent of Emiratis, after they left school, were not equipped to begin their degree courses, and instead had toembark on a bridging ‘foundations programme’to raise them to an acceptable standard. There are plans that these university foundation programmes will soon be scrapped, as schools step up to plug the learning gap.

“School students were not meeting the required levels, and there was enough evidence of a pressing need for the system to be changed,” explains H.EAl Amimi. “There’s also a big misalignment between what the market requires graduates to study, and what the students themselves are specializing in—a lot of young Emiratis are unemployed because they’re studying the wrong disciplines. They never had proper career counseling to help them choose the right career. Mostly, they’re focused on ICT and Business Administration, while actually you also need people who are engineers, science technicians, and even experts in literature. So it’s about diversifying our workforce.”

H.EMs Al Amimi has been involved in ADEC’s ambitious changes in the curriculums of public schools, such as changing to a bilingual English-Arabic model, and moving from rote-learning to interactive-learning. “The bilingual model was introduced gradually, starting with the youngest students, who are now in grade eight. So we have four years to go to finalise the entire system.

“We’re half way through our journey, and I strongly believe we’re on the right path, but it’s difficult to judge right now. We need people who started in grade one to pass through the new system and graduate from high school, and then we’ll be able to tell if it’s worked. There are signs of success.”

H.E MsAl Amimi says her department has learnt lessons from observing successful educational models operating in other countries such as Finland, Singapore, and China. But ADEC doesn’t believe in trying to imitate foreign systems.

“We look at their best practices to enlighten us to make better decisions, but we also have to customize what we learn to our own needs. We have to remember our own unique culture.

For example, because of our hot summer desert environment, it would be very difficult to extend the school term into the summer, as in certain other countries. Somepeople think we have a lot of school breaks, but those breaks are needed. Looking at our families and how close we are to each other, you can’t keep a student at school until 4.00pm. The family is an important factor in their growth.”

And in H.E MsAl Amimi’s own family, it’s her 13 year-old daughter who she says inspires her in her life the most. “Being a mother helps me to try to understand other people’s points of view, because I have to listen to her and try to understand her perspective, rather than just thinking about what I want.

“What really motivates me is my contribution to the future generation of my country. Even if it’s a small contribution, it gives me such satisfaction. I have challenges everyday, but I try to pause and see the bigger picture, and that’s what keeps me going.”