Leadership Lessons from the Father of the Nation, the late Sheikh Zayed Bin Sultan Al Nahyan 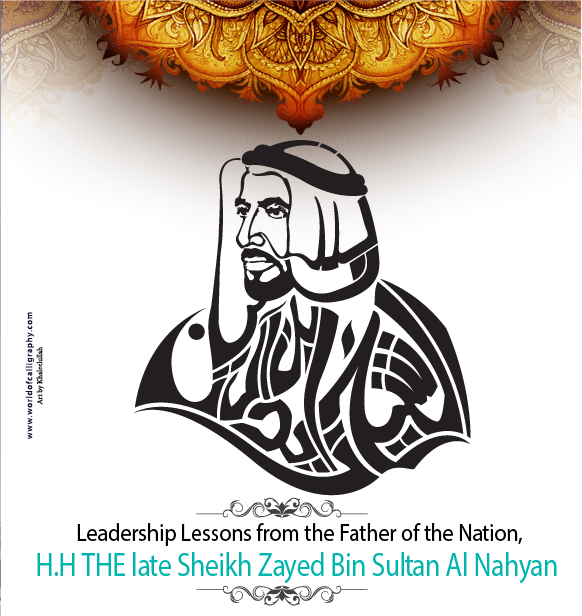 There is no better time than the present for aspiring leaders and local entrepreneurs in Abu Dhabi to invest in themselves and explore the spirit of entrepreneurship!  Following the example and vision of the late Sheikh Zayed bin Sultan Al Nahyan to empower his people to greatness, his son, The President of the UAE, H.H Sheikh Khalifa bin Zayed Al Nahyan, and the Rulers of the Emirates have ensured that strong government support and funding is available to Emiratis to tap into and ignite their start up projects! If you have been lacking inspiration or need a motivational kick-start to set up your own business, then this article is for you.

Drawing on the wisdom and success of the visionary leader and inspirational founding Father of the Nation, we look to the life of the late and revered, Sheikh Zayed Bin Sultan Al Nahyan for insights on entrepreneurship and leadership. Sheikh Zayed was a man of profound religious faith and generosity; a de termined hard worker, and a visionary leader who lead his people and country into a new era of development and prosperity. To truly comprehend the UAE one has to understand the life of Sheikh Zayed; this great ruler was born in Al Ain in December 1918, the youngest of four sons to the Ruler of Abu Dhabi, Sheikh Sultan bin Zayed bin Khalifa Al Nahyan, who ruled from 1922 to 1926. The Trucial state of Abu Dhabi, as it was known then, was an underdeveloped desert area with an economy largely based on pearl diving, fishing and date farming, and simple agriculture. Education was limited to basic reading and writing lessons, and teachings in Islam by a local Imam. Camels the ships of the desert, small boats and horses were primary modes of transportation in the harsh weather conditions where survival was paramount.  Back then, everyone’s daily lifestyle was simple, even for members of the ruling family.

In the late 1920s and 1930s, Sheikh Zayed acquired a thirst for knowledge that led him on a desert journey with his fellow Bedouin tribesmen in a quest to learn about life and travels of the of nomadic Bedouins. Throughout his lifetime he was known to refer with nostalgia to his desert travels, and would fondly recall the important life lessons he learnt from the Bedouin desert life. In 1946, as the Ruler’s Representative in the Eastern Region of Abu Dhabi, centered in the oasis of Al Ain, he was responsible for administrating six villages and a bordering desert region. As a man who led by example, Sheikh Zayed was able to establish his vision of what he hoped to achieve for the people of Al Ain. He succeeded in bringing progress to Al Ain by establishing basic administration, personally funding the first modern school in the emirate and by pursuing support and contributions from relatives and friends in support of small-scale local developments. In August 1966, Sheikh Zayed was appointed as the Ruler of Abu Dhabi and utilizing the valuable experience he acquired in public administration in Al Ain, he soon developed a vision of sustainable excellence for the citizens of the UAE. With Abu Dhabi’s first oil export in 1962, Sheikh Zayed skillfully utilized oil revenues to fund greatly needed public and social services, including extensive development and construction programs for schools, housing, hospitals and roads. In 1968, it was clear that a British withdrawal from the Arabian Gulf was eminent. Seizing this opportunity, Sheikh Zayed and the late Ruler of Dubai, Sheikh Rashid bin Saeed Al Maktoum called for a federation that would include the seven emirates that make up the United Arab Emirates In 1971 the United Arab Emirates was formed, and Sheikh Zayed was elected by his fellow rulers as the first President of the UAE, a post to which he was successfully re-elected at five-year intervals.

Sheikh Zayed’s unfailing vision for the UAE was accomplished by continuously setting the highest expectations for his country in politics, economy, education, and social goals. With this vision in clear sight, Sheikh Zayed provided his people with all the support and resources necessary to manifest this vision.

Dedication to your people

Sheikh Zayed said the following about being a leader, “Those in the position of leadership should deal with their subjects with compassion and understanding, because this is the duty enjoined upon them by Allah, who enjoins upon us to treat all living creatures with dignity”. Sheikh Zayed’s respect and love was easily earned by selfless devotion and commitment to the betterment of his people and his dedicated service to his nation. As a leader and statesman, he maximized the oil rich resources of the country to the benefit of the people, including women and the less fortunate, who benefited from education, employment and equality.

Sheikh Zayed was a formidable and charismatic leader with a simple and direct approach to communication.  He had the ability to confidently express himself to his people and fellow Rulers through clear and straightforward communication, enabling his vision to be shared and adopted. His speeches were a blend of sincerity and humbleness and a constant source of inspiration and motivation to his people. He was a natural listener, and was known to maintain an open door policy with his fellow Rulers and the general public. A true pioneer in the art of the recently coined term “Management by Walkabout”, Sheikh Zayed was renowned for appearing unannounced to check on the general welfare of his citizens and progress on sites.

Sheikh Zayed managed local and international stakeholder expectations with immense dignity and respect, enabling him to forge great relationships based on harmony and mutual respect. In governing the nation, he drew from Arabian Bedouin traditions of consensus and consultation. At an informal level, that principle has long been practiced through the institution of the majlis (council) where a leading member of society holds an “open-house” discussion forum, at which any individual may put forward views for discussion and consideration.   Sheikh Zayed formalized the consultation process and established the National Consultative Council in 1970, bringing together the leaders of each of the main tribes. A similar body was created in 1971 for the entire UAE: the Federal National Council, the state’s parliament.

Sheikh Zayed instilled a deep pride in his people and invigorated the young nation by setting challenging goals. Besides his humanistic qualities, he was admired for his pragmatism and easy down to earth attitude and problem-solving abilities. World leaders with whom he interacted with were captured by his infectious optimism and extraordinary capacity for patience. As an engaging leader who held strong beliefs in practicing peaceful negotiations in resolving disputes, he also possessed an inherent quality to draw his own conclusions, and offer fair and just solutions to local and regional issues.

Sheikh Zayed, known for his humble, generous and understanding nature was respected for the wise advice and support he bestowed on his tribesmen whenever they sought his council.   As a generous leader, he cleverly managed oil revenue to the betterment of his people and country. In the Balkans, Iraq, Afghanistan and other countries, the adopted policy in the UAE clearly reflects the desire of Sheikh Zayed to apply the good fortune of his country to those less fortunate. Through local charitable organizations such as The Zayed Charitable and Humanitarian Foundation, Abu Dhabi Fund for Development, which he established before the foundation of the UAE, and the Red Crescent Society, a charitable non-profit institution, the country now plays a global major role in providing relief and development assistance. Disclaimer