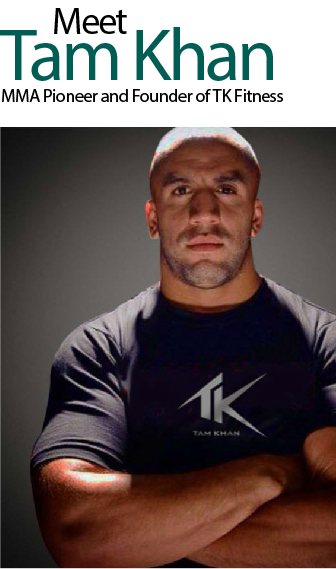 If you haven’t heard the name already, Tam Khan has been making headlines in the world of mixed martial arts in the UAE over the past 5 years. Once a sport foreign to UAE residents, Tam is recognised as one of the pioneers of Mixed Martial Arts (MMA) in the UAE and the region as a whole. In his exclusive interview with PSE, Tam shares his story.

Tam was born in London in 1982 to Afghani parents who had moved to the United Kingdom in 1979. At the age of 11, Tam and his family relocated to Essex where his father was offered a better job opportunity. Essex is where Tam went on to spend most of his senior school life. Tam recalls being one of the very few ethnic minorities in town, a fact that meant he was subject to a good deal of racism-fuelled bullying.“We moved to Canvey Island, the most British town in Britain, and I was the only ethnic kid in the whole town!” Tam says with a laugh.

After a few rough encounters with some of the kids from the neighbourhood, Tam’s mom put him in the nearby boxing gym. “You have to be a man!” He recalls his mom saying, using his best Afghani mother impersonation. “From there, that was it. I built some muscle and learn how to fight. You have a little six pack at that age and its like you’re the man!” He chuckles. “Being ethnic and different, people start liking you and I eventually made a lot of friends.”

By the age of 15 to 16, Tam started to significantly improve his boxing skills and began taking the sport more seriously. Then one day he came across his first Ultimate Fighting Championship (UFC) video. “I was like, what is this?! I came across Royce Gracie, who was undefeated at the time, smaller guy taking down bigger opponents with his jiu-jitsu. I fell in love with it. Then one day I was walking down my high street when I came across this advert in an Italian restaurant of this popular local tough guy named Daniel Burzotta advertising Gracie Jiu-Jitsu Classes.”Tam couldn’t resist and went in to met with the trainer who told him he trained with Gracie in Los Angeles. Soon after, he joined his club. “We trained in a small space behind a church yard with a couple mats on the floor! That was the club! It was me, him, and 3 others. I was the biggest guy there at the time and thought I was so tough, until I got beat by this skinny little guy over and over again. He would just be hanging on my arm and I kept tapping out. It was driving me crazy but I just fell in love it. It was a challenge and soon I was training as often as I could.”

Three months after first joining the jiu-jitsu club, Tam won bronze at a National Jiu-Jitsu Tournament. From there, Tam participated in a few local mixed martial arts tournaments. It was during this time that he got the chance to meet Royce Gracie in person during a seminar at his gym. Progress was indeed being made.

In 2005, Tam came to Dubai on holiday for the first time. “I couldn’t believe it. I was like, this place is amazing! Everything is halal, halal fast food everywhere! Then I remember one day after returning from Dubai, I was working in mobile phone sales. It was cold and I was sitting on a bench on a work break and thought: I am going back to Dubai!” Tam soon returned to Dubai on holiday. He was preparing for an upcoming fight at the time and so went on search of a good local MMA gym in Dubai. The results came back empty. Finally he found a small dojo with a jiu-jitsu and a kickboxing trainer, but there was no MMA centre to be found, and that’s when it hit him. “I thought to myself. That is what Dubai needs, a full MMA centre! I packed my bags and moved over in 2008, just in time for the recession!I started checking out the local gyms and eventually started teaching at a local gym called Top Sports. I had a Lebanese student who eventually became a close friend of mine, and he recommended that I make some flyers. So, I printed some flyers and soon enough I started getting a few customers. Then one day, a journalist from 7 Days shows up and does a piece on me. It ended up on the front page. The next day, my phone started ringing like crazy. When I showed up at the gym, which was the size of my kitchen, it was packed!” Tam exclaims. “And from there it took off. It just went crazy!”

Tam even managed to bring Royce Gracie over to do a few seminars at local gyms as he continued to train himself wherever he could to prepare for fights and keep in shape. “There were no MMA trainers. So I was doing it old school; running and doing pushups in Safa Park, self-training, and getting support wherever I could. He travelled back and forth from Dubai and the UK to attend a few fights, some of which he won and a few that he lost. Then, in 2010, the Abu Dhabi Fight Championship contacted Tam at the last minute to fight in the debut tournament. “It was a few weeks notice. I hadn’t trained or prepared but I took the fight. It would be good for the gym. I turned up and beat the guy in 3 rounds, but I was dead!” A few months later, the UFC came to Dubai for the first time and Tam knew that Dubai was ready.

Together with a few friends and investors, Tam opened up his first gym, The Contender. “It was a huge success. We had a massive opening. I brought Wanderlei Silva down (MMA legend) and many other leading names in mixed martial arts from around the world.” In 2012, The Contender closed due to landlord issues. From there, Tam opened up Glory Gym on Meydan Road with a partner. “Glory was another huge success. Fight Zone Magazine even voted us as the number one MMA gym in the world! Unfortunately though, due to some differences in opinion among the partners, I went my separate way.” Tam explains. Next up for Tam was establishing his third MMA Gym in Dubai soon after. HM Fitness was another joint partnership that he was involved in from the beginning.“That was a huge success, eventually becoming globally recognized with a host of MMA stars from all over the world coming to give seminars, events, and special appearances.”

During this time, Tam also launched the successful local fight promotion, Dubai Fighting Championship (DFC). Now in its 4th cycle, the show sold out every time. With Royce Gracie as Ambassador and Tam putting together the fight cards with a close team of friends and promoters, the DFC has become one of the most anticipated sporting events in the city!“Our 4th one was huge! We moved from a conference room at the Habtoor Grand Hotel to Madinat Arena! We had pay per view streaming online for the first time, and more importantly, Sheikh Maktoum bin Rashid Al Maktoum was a guest of honor! That is unheard of at events here! That was amazing to have him here!”Tam had trained Sheikh Maktoum and developed a good friendship over the years. “We were good friends. He is such a nice guy and has helped me out a lot during my time here.” Tam says of the Deputy Ruler of Dubai. “We managed to get SkyDubai to sponsor the last show as well which was a huge support.” He adds.

After his third gym venture, HM Fitness, Tam decided that it was time for him to part ways and establish his own brand. “I thought to myself: Why build these names when they can go down? I am going to build my own brand. I decided to use my own name and call the brand TK Fitness.” Not one to shy away from work Tam also tell us about his other projects, “I am also working on a Promotion Arm for fight night events and a clothing line Insha Allah” he tells us.

TK Fitness was launched at the beginning of 2016 in the heart of Dubai Marina. The gym boasts separate sections, which include a mixed training area for combat & martial arts, a section for cross training & conditioning & a fully functional fitness gym.“We’ve got world class coaches and some fantastic partners this time around, and thankfully I have a big group of loyal followers from my previous gyms who have joined.” 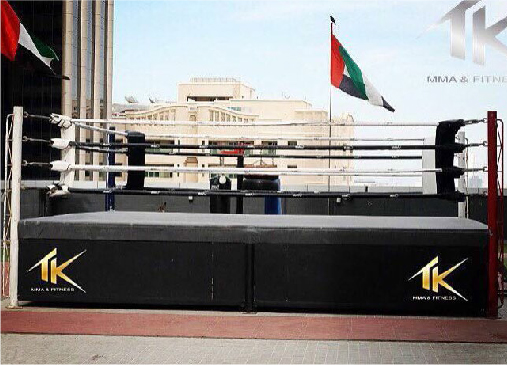 We asked Tam what he thought were the biggest challenges involved in setting up a business in the UAE, and after 3 gyms and a long learning curve, here is what he had to say: “You need to find a good and trustworthy sponsor and fair investors if you need financing. Choose wisely.More importantly, if you don’t put your contract down in writing and have it reviewed by a lawyer, you are setting yourself up for problems. You need to know your value to the business and negotiate terms that work in your favour. At the end of the day though, the laws here fair and business owners are protected.” Tam insists.

“In my opinion, the best place to network is Dubai, and the best place to build a successful business is Dubai! The way the global economy is right now, there is nowhere else like here, unless you are a huge business tycoon or global superstar. What I have been able to do here is amazing!  In terms of start-up success factors, Tam insists that “you have to take risks. That’s number one. If you are scared of failure, you will never get anywhere. It’s like going into a fight, you are either going to win or lose. But if you have that fear, you have lost already.”Furthermore, Tam believes that to be successful, “you should concentrate 100% on what you are good at and focus on that one thing. Too many people here are trying to do so many things at one time. Unless you are Bill Gates or Donald Trump, that’s not going to work.”

So what’s next we ask? His response was immediate: “I want to build a brand, open branches everywhere, make a clothing line, and produce fighters who make it to the world stage, UFC level types! I am also thinking of launching a YouTube channel to share some of the amazing moments at TK Fitness and other events and activities I am involved in. Lastly, I want to get a few more fights in myself before I get too old.”

Before we ended the interview, Tam insisted on ending with a thank you note: “I want to give a special shout out to all of my supporters, family and friends who have helped me along this journey. I also want to thank the UAE and its great rulers for all their support and love!”