Speaking to us from the comfort of her living room/office in her Abu Dhabi home, Noor Al Tamimi humbly juggles the tasks of conducting our interview while simultaneously attending to her business needs via her assistant nearby, and the demands of her children who enter unexpectedly from time to time to beg mom for her attention.

Daughter to an Emirati father and Jordanian mother, Noor, like so many of us in today’s globalized and multicultural world says she is lucky to have the broad cultural awareness and experience that comes with a multinational background. Noor’s early education was spent mostly at Abu Dhabi’s Al Wurood Private School, which was largely composed of children from expatriate families living in Abu Dhabi as well as some Emirati children who opted for private education at the time. Her summers were spent in Jordan with her mother’s side of the family where she immersed herself in the local Jordanian culture and customs. Noor comments that these experiences exposed her to different cultures, ideas, traditions, and beliefs.

Noor left high school after completing her O-level examinations in grade 11 and joined the Higher Colleges of Technology. “I am the kind of person who is always in a hurry. Once I learned that I could leave high school early, I took the opportunity immediately,” she comments. “The biggest part of my learning was during my time at the Higher Colleges of Technology. I learned so much. The excellent thing about HCT is that they teach what you need to know and that’s it. Most of the work is practical, hands on work.” She says that this type of learning suited her personality and preferred learning style so much, which had a major impact on her later in life.

Noor comes from a finance family. Her father has worked at the UAE Central Bank since she was a child and Noor was inclined and encouraged to follow in her father’s footsteps and get her finance degree at college. After graduating, she accepted a position as a financial analyst. She looks back fondly at this period of time where she was able to dive into the financial side of businesses and understand how important various financial components were to the life of a business. But she soon realized that it would be very difficult for her to continue in the banking industry. Noor admits that, “There is not much creativity involved in financial analysis. I can create the best looking report to present to management, but when it comes to adding and subtracting numbers, it’s not my thing.”

Noor’s first entrepreneurial venture came soon after realizing that banking and finance was not for her. She wanted something creative, something that was her own. She started her first company at an early age which came in the form of an Interior Décor company. “I did something crazy. I wanted to sell a special type of tapestries which were not commonly available at the time, but did not have the resources to invest in a big space. So, I decided that the best and most effective way to market my product was through mail order,” Says Noor. She sold her tapestries through a catalogue which she inserted in Zahra Khaleej, an extremely popular magazine at the time. “It was a huge success,” Noor says triumphantly. Nonetheless, Noor could see that her new business model was limited; it relied heavily on her sourcing personally the best and latest materials from around the world, something that a mother of two cannot afford to do. “I realized that my customers were buying my taste and style, not my products,” Noor says. “I put a lot of effort into sourcing the best materials which I knew my customers would love and I would always have to be heavily involved to continue to succeed. I always knew I wanted my own business and I knew that I wanted a business that could go global.This was not the one.”

“A dear friend introduced the idea of opening a nail bar. The demand was higher than the supply in Abu Dhabi but I was hesitant to fall into a stereotypical female business woman role in the beauty industry, especially after the successful passing of a law in 2000 for Emirati women to own businesses outside of the beauty and cosmetics industry.” She soon felt herself being drawn closer to the idea, especially as she considered the potential that such a business has to grow and succeed. Selecting partners was an easy task. At home, Noor easily saw the perfect partners in her sister Dana who had a knack for marketing and Budour who,like their father, was the finance wiz among the sisters. In 2008, Dashing Nails was born. “The idea was to create a dashing world, a great world,a world for customers, for employees, and for anybody who came into contact with it. The world is full of misery and problems. I wanted to create a magical world where everyone is respected and treated like royalty.” She then makes a clear point: “Don’t misunderstand me though. I am not as cool as I may sound. Most people know me to be very strict and some might even be afraid of me. At the end of the day, I do have a finance background and I pay close attention to the numbers. But in my heart, this is how I envision my business and this is what I work towards.” 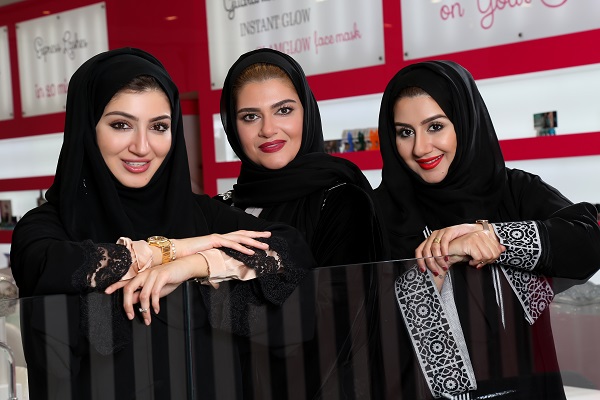 Noor believes in paying employees well. She set up a fair and attractive commission structure for her employees, a move that was fairly new in the local industry at the time. This structure has been a significant contributor to motivate Noor’s employees to work harder and better, all the while being rewarded for any extra effort. “Who makes the clients happy?” Noor asks. “The employees do, and happy employees keep happy customers. We focused a lot on training and practice at the beginning and continue to do so. If it is not ‘wow’ to me, then it shouldn’t be offered to the customer,” Noor says. However, Noor explains that while investing in training and development is vital for the provision of excellent services, this has recently become a double edged sword. Previously, the Ministry of Labor allowed for employers to claim back training and development costs from employees if they leave the business prematurely.The rules have since changed in favor of the employees, a move that has made such investments in talent development riskier than it once was. Noor gives us the example of a training program that she invested in to reduce the time it took for an acrylic nails service. “I wasn’t satisfied with the time it took for this service,” Noor says. She hired one of the top beauticians in the world from America to come and train ten of her employees in the latest and best techniques in the field. The program resulted in the reduction of time for this service from two or three hours down to 45 minutes. “This was a big investment. My employees have received the best training in the field and have gained invaluable knowledge. But now, they are free to go to competitors with these new skills at no cost. This is a huge risk and will translate to low levels of service across industries as employers become reluctant to invest in training.”

When asked about the major rebranding initiative that the company recently underwent, Noor tells us the story of Bedashing. After the initial success at the flagship Dashing Nails bar on Delma Street and their second branch at Center Market, Noor and her sisters decided to go big. They applied for funding from the Khalifa Fund for Enterprise Developmentfor the establishment of their third and biggest branch at the time in Khalifa City A.Soon afterwards, and following a successful expansion of their business, the sisters expressed their interest in the Khalifa Fundfranchising program and were shortlisted from among a list of candidates for funding. Soon after, the sisters teamed up with a renowned branding consultancy to help them with their rebranding strategy. After a quick look at the company name, the consultantsadvised the team that the company name, Dashing Nails,did not have global appeal. After considering the options,the team agreed on a strategy to rebrand the company with a fresh and original new name, look, and feel. Initially, the company’s slogan was “Be Dashing!” This slowly evolved to become a catchy name that resonated with the sisters, and so Bedashing was born. Just as Noor is trying to conclude her story, one of Noor’s daughters enters the room, demanding mommy’s attention. “I have five daughters by the way,” Noor interrupts. After quite a few utters of “Masha Allah” from my side, Noor adds with a laugh, “So I am in the right business!”

Today, Bedashing has five branches across the city with over 200 employees. By 2025, Noor and her sisters aim to have 200 branches across the region delivering 1000 services per day between them. “Those 200 branches will be owned by women,” Noor says proudly. “Like I said earlier, my business has to mean something. Our purpose is to spread a piece of Bedashingto women everywhere. When a woman looks great, she feels great, and when a woman feels great she spreads positivity and love in her household which translates to positivity all around.” Another important goal that Noor describes is supporting women to financial independence. “We don’t look for rich franchisees, especially in Abu Dhabi.Bedashing is a profitable concept and Khalifa Fund will fund 90% of the franchise startup, so why should we give it to advantaged women?We have one franchisee already. She has found a location and fits perfectly with our selection criteria. Being the first franchisee, she will get extra support from us and share our success if we ever decide to go public.”

Bedashinghas received awards every year for their nail designs from the Nail It Awards hosted in Dubai, and in 2014 they won the What’s On Awardfor the best hair saloon in Abu Dhabi. “We are usually the only Abu Dhabi based salon which participates in the Nail It Awards. When they see our technicians walking down the aisle, they are like: Dashing is back again!” Noor says with a laugh. “And every time we win an award, another technician disappears to the competition!”

We asked Noor what some of the biggest obstacles were and the critical success factors required to successfully start up a business in Abu Dhabi. “The main obstacle is also the most critical success factor!” says Noor. “The difficulty of maneuvering the constantly changing laws for our specific industry is definitely the biggest obstacle, particularly the labor laws. But it is this difficulty that keeps competitors away and makes people think twice before entering our market!” Additionally, Noor comments that finding the right location in Abu Dhabi that is actually available and keeping up with rising housing costs for employees are some of the other serious challenges to consider. Noor continues by telling us, “When you decide what you want to do, make sure your business is ‘franchisable.’ Be specific with your product or service offering and perfect it. Read. Study your field and become the most knowledgeable specialist in that field. Focus on getting the right people, and more importantly, choose those who have a winning attitude to join your team.” In summary, Noor concludes by stating, “If you start with doing what you really love and can be great at, you can figure out the rest with the help of the right people and,insha Allah, it will all work out. Believe in your vision and put the pieces together.”