Overview of Abu Dhabi Ports Industry in Uplifting the Economy

Abu Dhabi’s ports plays a pivotal role in enriching the economy of the region andits maritime transport is of strategic importance for the emirates.The combined volume handled by Abu Dhabi’s commercial ports (Musaffah, Khalifa and Zayed Ports) during Q1 and Q2 of 2014 was 6.4 million FT containers, an increase of 37% compared with the same period last year, clearly demonstrating the growing value in handling such high import and export volumes.

Abu Dhabi Ports Company (ADPC) regulates and manages ports and industrial zones in the capital, and coordinates with the Department of Transport Maritime sector to develop a well-integrated, international standard maritime transport system. These two authorities initiate and implement all their plans, policies, and strategies in line with the Abu Dhabi Economic Vision 2030, the Abu Dhabi Agenda, and other government departments to create strategies that are aimed at diversifying the economy in the region.

ADPC drives the development, planning, construction, and operation of maritime infrastructure in the emirate, and their foremost role is to develop and manage world-class ports and associated industrial areas in the region.

The Maritime Sector of the Department of Transport(DoT)is another major player in the ports industry with its role as the main regulatory body for all modes of transport in the Emirate. The DoT has developed and implemented maritime regulations that ensure high levels of safety and security at all sea ports, waterways, and public water transportation, in addition to controlling all maritime trade in the emirate.

Other stated roles and responsibilities of the Department of Transport include:

Today, an estimated 60% of Abu Dhabi’s economy is dependent on the export of oil and gas. ADPC’s objective is to turn this around with major contributions coming from non-oil and gas industries.

From the onset, Abu Dhabi ports have been a corner stone in making the Economic Vision 2030 a reality by shifting the focus from finite oil and gas resources to sustainable industries. 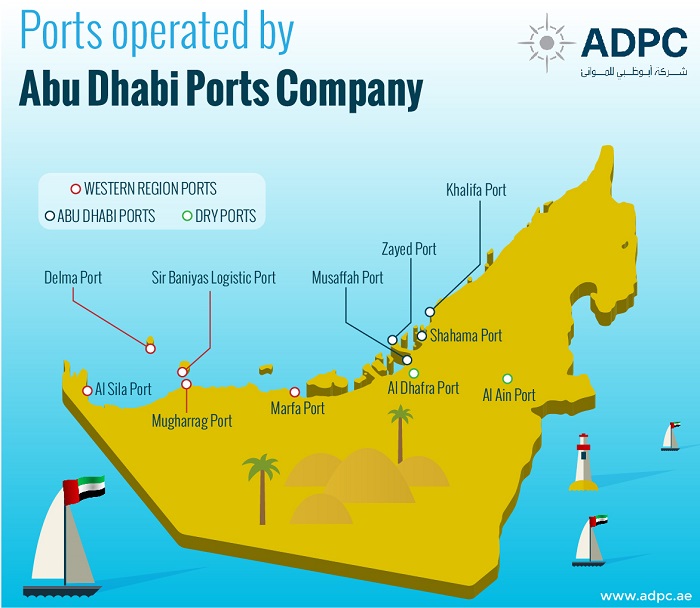 Major Changes and Development in the Port Industry

Since its launch in 2006, ADPC has played a major role in the development and up-gradating of a ports infrastructure in Abu Dhabi. Two major achievements of the port authority include the development of Khalifa Port, and the launch of the largest industrial zone in the world, the Khalifa Industrial Zone Abu Dhabi (KIZAD).

Over 50 national, international,and regional investors have signed lease agreements to construct their facilities in the zone. Bauer International of Germany and Brazil Foods, the largest food processing company in South America, are just two of the renowned international brands with established operations.

KIZAD is by far a much larger facility than Jebel Ali Free Zone (JAFZA),located approximately 80 km away in Dubai. In comparison, JAFZA covers an area of 48 sq. km, whilst Kizad covers an area of 420 square kilometers—two-thirds the size of Singapore and a quarter the size of Greater London.The industrial zone is expected to create 100,000 to 120,000 jobs by 2030,and at least 15% of the country’s non-oil revenue within the next two decades.

Khalifa Port is the second major development in the ports sector.As ADPC’s flagship port, it has been functional since 2012 and handles all of Abu Dhabi’s bulk container traffic. The fact that the port is semi-automated allows for more container capacity:up to 2.5 million TEUs and 12 million metric tons cargo annually. Last year alone, the port handled a record one million containers in Abu Dhabi.

ADPC’s long-term goal is to increase capacity to 15 million TEUs of containers and 35 million tons of bulk cargo by 2030, which will generate an estimated 15 percent of the non-oil GDP for the country.

ADPC’s Role in Ensuring Safety and Sustainability of Maritime Areas

ADPC‘s key mission is to achieve sustainable development whilst supporting community needs and preserving local values. This is achieved both via their own strategic goals and priorities, as well as by relevant legislation and regulations dictated by the Ministry of Environment. It also collaborates with the Ministry of Presidential Affairs as marine traffic and other operations are within close proximity.

Future Plans to Boost Economic Contribution of the Port Sector 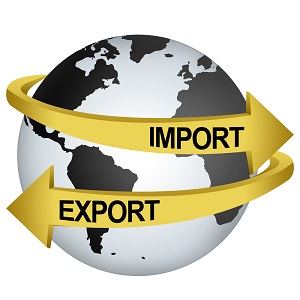 In line with Abu Dhabi Economic Vision 2030, ADPC plans to further upgrade port facilities in the region to increase the contribution of ports to the economy of Abu Dhabi.One of the key components of this is to maximize the supply chain efficiency and consolidate cargo.This is effectively being improved within the next two years.

Safety and reliability are other significant factors which will attract potential customers to utilize Khalifa Port, which operated 2 million man-hours with no lost time incidents as of August 2014.

Since September 2014, ADPC have experienced an increase in volume for handling and transferring cargo which is a result of the emirate’s expansion of key infrastructure projects.

Currently,Abu Dhabi earns over 55% of its income and GDP through hydrocarbons, however, under their economic vision, the target is to reduce this to 35% by 2030. Upcoming projects with Emirates Steel, Abu Dhabi Airport, Emirates Nuclear Energy Corporation, and others will advance the goal of economic diversity.

The cargo for these and other projects is distributed across the nine non-oil ports owned by ADPC. The major port is Khalifa. This, along with the Khalifa Industrial Zone, is expected to contribute approximately 15 percent of Abu Dhabi’s non-oil GDP.This will have a significant impact in terms of diversifying the economy, and will also help support job growth outside of the hydro-carbon industries.

ADPC’s strategic goals and key priorities are to increase the volume of cargo moved through the ports and increase the percentage of GDP achieved through ports and related services.By following the above initiatives, they are taking steps to achieve these goals.

The port’s industry is becoming the backbone of non-oil GDP for Abu Dhabi with its world-class facilities and increasing cargo handling capabilities, and will serve an even more important role in the coming years.