Abu Dhabi, being endowed with the largest oil deposits in the UAE, counts the oil and gas sector as a vital component of its economy. The emirate contains more than 90% of UAE’s oil reserves and 85% of its output capacity. In addition, around 9% of the world’s proven oil reserves and 5% of the natural gas reserves are present in Abu Dhabi.

Before the discovery of oil, Abu Dhabi was largely an undeveloped desert area. The tribes who inhabited the lands were primarily farmers, pearl divers, and traders. Qasr Al-Hosn, the Ruler’s Fort, was the only prominent building in Abu Dhabi.However, all this changed after the discovery of oil in late 1950s.With the influx of petrodollars, the area was rapidly transformed into a modern metropolis. 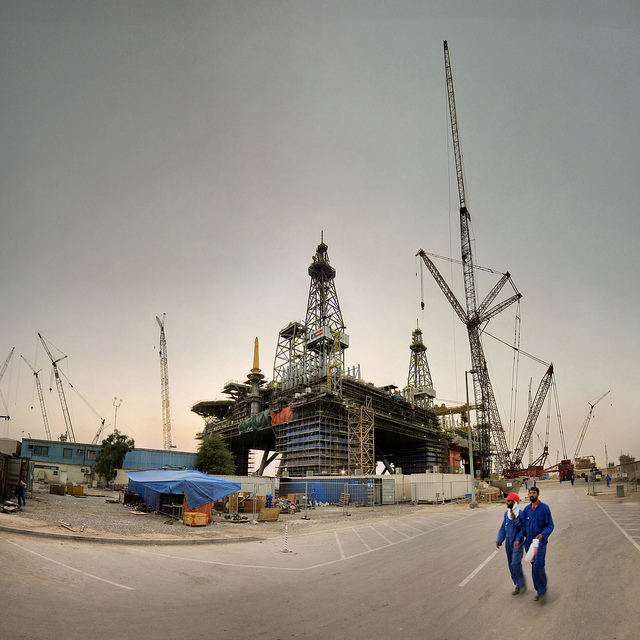 Presently, this sector comprises almost 55% of Abu Dhabi’s GDP. The rapid developments that have turned Abu Dhabi into a modern city wouldn’t have occurred without the discovery of hydrocarbons in the region.

Abu Dhabi Vision 2030, launched under the leadership of H.H Sheikh Khalifabin Zayed Al Nahyan, plans to further develop the oil and gas industry, while at the same time diversify the economy to reduce its reliance on this sector. The task of developing the oil and gas industry in the region rests with UAE’s Ministry of Energy and ADNOC (Abu Dhabi National Oil Company).

UAE’s Ministry of Energy represents the state’s interests in energy, water, and mineral resources. Their key role is to develop and implement general policies and legislation—based on consultation with key stakeholders—to fit the energy sector as per the international standards.

The vision of the Ministry of Energy is to preserve and develop its energy resources to achieve long lasting sustainability.They provide relevant geological and geophysical information to help with development of oil and gas in the region. In short, they offer support services to Abu Dhabi National Oil Company for development and exploration of oil and gas.

Some of the stated objectives of the Ministry of Energy include:

ADNOC (Abu Dhabi National Oil Company), established in 1971, manages and controls all aspects of oil and gas industry in the Emirate. Operations of the company have to comply with the UAE Ministry of Environment and Supreme Petroleum Council’s (SPC) petroleum policies and regulations. The SPC acts as a board of directors for ADNOC and gives direction for how the company should operate and act. 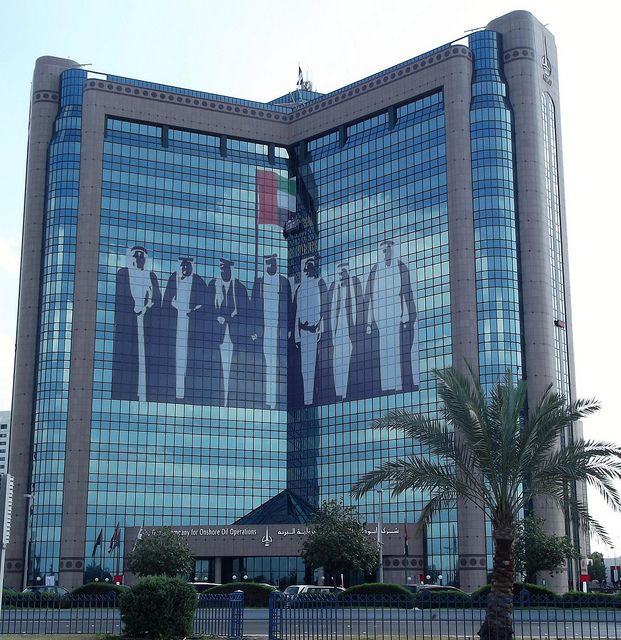 The vertical integration of subsidiaries not only gives them a competitive edge, but also makes ADNOC one of the ten largest oil and gas companies in the world. It manages oil production of more than 2.7 million barrels a day. With one of the largest oil and gas reserves in UAE, ADNOC is looking forward to continued sustainable growth of the oil and gas sector in the future.

Contribution of Oil & Gas Sector to the Economy of Abu Dhabi

This year the total contribution of the oil and gas sector to the GDP is expected to further decrease to 49%. The decreasing contribution of oil production to the total GDP is in line with the Abu Dhabi Vision 2030 that envisions reduced reliance in the oil sector in the coming decades. Abu Dhabi Vision 2030 emphasizes further development of the oil and gas sector in Abu Dhabi, while at the same time reducing reliance on this sector by promoting other industries to create a diversified and sustainable economy.

The Evolution of the Oil & Gas Industry in Abu Dhabi

The Emirate started quite late in the oil and gas export business compared with other gulf states. It was not until 1958 that the first oil well was discovered in the region. Abu Dhabi Marine Areas (ADMA), initially owned by British Petroleum (BP) and Total, discovered oil in commercial quantities at Umm Shaif close to Das Island in Abu Dhabi.

Soon after, an oil production and processing facilitywas built on the island. Export of crude oil began in 1962—the year that UAE joined the family of oil exporting countries in the Gulf region. It quickly transformed the region from a desert oasis to one of the most modern metropolitan areas in the world.

Petroleum Development Company (Trucial Coast), a subsidiary of theIraq Petroleum Company (IPC),discovered the onshore Bab oilfield followed by Bu Hasa field in 1962. The company changed its name to Abu Dhabi Petroleum Company (ADPC) that year,agreeing at the same time to giveup parts of its concession to the government of Abu Dhabi every two years thereafter.In 1968, a third concessionary company, Abu Dhabi Oil Company (ADOC), was formed to further explore and develop the oil and gas sector in the region.

After independence of Abu Dhabi from Britain in 1971, Abu Dhabi National Oil Company (ADNOC) was established to manage all aspects of the emirate’s oil and gas industry. Subsequently, the national oil and gas company acquired 60% ownership of both ADPC and ADMA.

In 1977, ADMA was renamed the AbuDhabi Marine Operating Company (ADMA-OPCO) and designated as the emirate’s offshore operator. It maintains the main offshore oilfields at Umm Shaif,Lower Zakum, Upper Zakum, al-Bunduq, and Abu al-Bukhoosh. The onshore operations in Abu Dhabi were designated to Abu Dhabi Company for Onshore Oil Operations (ADCO)in 1978.In 1990, the Umm al Nar salt and chlorine plant was merged with the Abu Dhabi Refinery to become the ADNOC Abu Dhabi Refinery. Apart from these, various other subsidiaries were formed to manage, operate, and further develop the oil and gas sector in Abu Dhabi.

Over the next decades, oil and gas production increased gradually in Abu Dhabi. Notable developments during the period include a comprehensive gas injection project to enhance oil recovery, a compression platform and injection network to deliver the gas to the injection wellheads which is capable of handling a total of 300 million cubic feet daily, and two oil refineries in Umm al-Nar and Al-Ruwais capable of refining 85,000 and 120,000 bbl/day, respectively

Today, unlike other gulf regions where the government maintains 100%control of oil and gas operation in the country, Abu Dhabi retains foreign partners in this sector on a production-sharing basis.Oil companies from Japan, UK, France, US, and elsewhere own up to 40% of the energy sector in Abu Dhabi.

Subsidized Oil for Local Consumption and Its Benefits

The government of Abu Dhabi provides energy subsidies to its citizens and residents alike. Subsidizing fossil fuel ensures that all residents, especially the poor, are able to enjoy consumption of their country’s natural resources at an affordable price.In addition, the oil subsidies greatly help in uplifting the economy of Abu Dhabi.

Selling fossil fuels domestic all yat below-market price is a form of subsidization of petroleum consumption.The low petroleum prices help in the development of various businesses by lowering the cost of transportation and other factors that rely on petroleum products. This enables them to increase their competitiveness and sell their products at lower cost to consumers.

On the other hand, subsidized energyalso increases energy consumption. This results in an increased cost of gas and refined fuels that have to be ultimately borne by the government. For example, a consumer in Abu Dhabi pays around four U.S. cents per kilowatt-hour for subsidized energy while the actual cost to the government is between 8.9 U.S.cents to 17.7 U.S. cents.Subsidizing the refined fuels market diverts precious resources of the government that could have been utilized in capital projects for stimulating the economy.Additionally, subsidizing energy may also result in an increased cost of petroleum products in the international market.

Future Outlook of Oil Production and Consumption in Abu Dhabi

While Abu Dhabi has large volumes of gas and oil reserves, they cannot last forever. According to the government’s estimate, there are about 92 billion barrels of oil reserves in Abu Dhabi. The emirate produces about 2.9 million barrels per day of total oil liquids, which is slated to increase to 3.5 million barrels per day by 2017 according to the Minister of Enery, Suhail Mohammad Al Mazroui. Thus, Abu Dhabi’s reserves-to-production is about 93 years.In addition, Abu Dhabi has about 5.8 trillion cubic meters of natural gas reserves, which will last around a century at current production rates.

The government of Abu Dhabi is therefore looking at alternative energy sources including solar and nuclear energy to compliment the use of fossil fuels. Abu Dhabi Vision 2030 envisions that the non-oil sector will play a major role in contributing to the economy of Abu Dhabi.

To move forward,the government of Abu Dhabi has taken an active diversification and liberalization program to reduce the reliance on the hydrocarbon sector. This is consistent with the Abu Dhabi Vision 2030 concerning the need to diversify the economy. Investing profits from gas and oil into development of the non-oil sector is a wise move by the government that will add to the stability and sustainability of the economy.