Today, some 90% of the world’s commodity trade is transported via the sea, whilst the percentage has remained fairly consistent over the past few decades, the volume of world trade, thus the volume of seagoing cargo, has increased significantly during that time.

The availability of ports acts as an accelerator to the economic development process of a region. Shenzhen, once a small fishing village, is a perfect example of the influence a port can have on a city’s development. Within just a few decades, Shenzhen morphed from a fishing village to China’s first and most influential Special Economic Zone.  catalyst

Certainly, the economic benefits of a port are substantial—facilitation of trade, employment, industrialization, regional influence, and more—but a port is also a two-edged sword. There can be negative impacts on the region’s natural and cultural environment, health concerns, challenges with insufficient infrastructure, and a host of other issues.

Port administration and operations are today improving hand-in-hand with improvements in technology, especially in the areas of process automation, which allows for more container capacity while reducing congestion and improving turnaround times. In large part, traffic congestion of all types is decreased by the integration of large scale industrial zones. For example, the port administration in Abu Dhabi, ADPC, is attracting increased local and foreign investment with the Kizad industrial zone. Kizad and similar zones serve as hubs for manufacturing, logistics, and trade across a number of industrial sectors. This will translate into substantial economic gains for Abu Dhabi, as other industrial zones have already done in their respective countries.

Cases of Best Practices in the Port Industry

Port of Rotterdam is the busiest port in Europe, and until 2002 the busiest in the world. The port was initially built on the banks of Nieuwe Maas River, which provided poor access to the North Sea. However, during the 20th century, port activities and infrastructure were shifted to the coast.

The port has witnessed a growth in transshipment activities, with the steady rise in the number of vessels docking at the port. However, the amount of cargo, in comparison to the vessels count, has risen even more due to the port’s ability to handle larger vessels and its improved capacity management system. The port has implemented efficient techniques to reduce the turnover time to 4 hours, 37 minutes.

New Port Management By-laws simplified the administrative burdens and increased efficiency in port operations. They replaced exemptions with notifications, which are simpler to process by email communications and allow loading and unloading to begin immediately.

Through vigilant supervision and accountability for the proper usage of berths, compulsory safety checks, regular maintenance, and other measures, port authorities significantly reduced the rate of nautical accidents, even beating the target.

The Port of Rotterdam Authority has significantly reduced pollution from ships, especially in the inland waterways. To a great extent this is due to the implementation of the Shipping Waste Decree, which enables streamlined interactions between all relevant government entities.

The port outsources its cleanup services to ensure maximized efficiency when a spill occurs. The clean-up organization is available on standby on premises 24 hours a day, seven days a week.

To match the global standard of storage efficiency, the Port of Rotterdam has divided its storage operating into different administrative divisions.

The Port of Rotterdam is considered the pre-eminent port for the accommodation of ultra-large vessels, which are mainly used for the Asia-Europe trade, especially with China. The increased demand was anticipated, and sufficient storage is maintained.

Port of Los Angeles, also known as Los Angeles Harbor Department, is the busiest container port in the US, followed by the Port of Long Beach which it adjoins. The port complex occupies 7,500 acres of water and land. 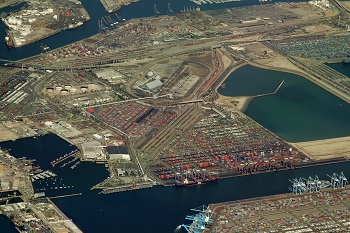 Through the employment and execution of an ongoing Capital Improvement Program (CIP), the port has been able to deliver planned development projects within the prescribed time and budget. A CIP allows the systematic evaluation of future projects, provides debt stability, and helps to reduce the burden of borrowing costs.

An independent department is responsible for the training of all ports staff. It partners with external educational institutions to create tailored workforce development programs for current needs and for skills that will be needed as the port transitions to more advanced technology.

The Port is creating a new business development plan to increase market share. It will reflect the changing dynamics of the ports industry and leverage existing relations with associated cargo owners, ocean carriers, supply chain stakeholders, etc. The purpose of the plan is also to increase export volumes by expanding the current Trade Connect programs, and improve tracking of contracts under the Trade Connect programs to provide insights for future strategic planning.

Finally, the Port is improving the efficiency of financial control and reporting with improved resource planning systems. 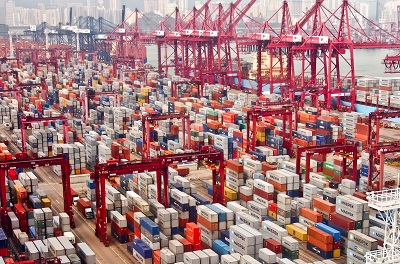 Port of Hong Kong is one of the busiest in the world, even while it faces massive competition from the neighboring ports of South China. The constant pressure has resulted in the Hong Kong Port Plan 2020, which aims to develop better infrastructure and adopt best practices to ensure maximum efficiency. Some of the initiatives underway:

Port of Hong Kong has maintained its position as an industrial leader through rapid adaptation and innovation. The port reshaped its shipping patterns to retain the advantages of its high efficiency.

The port has a total non-container capacity for both ocean and river cargo of 59,359 tons, segregated into petroleum, coal, iron and steel, cement, and other. For efficiency, River Cargo is further separated into stone, gravel and sand, iron and steel in break bulk, crude materials, various fuels in liquid bulks, and other.

Consignees and shippers have the option to choose from various competing ports in the region. The principal factor which determines the choice is the efficiency in terms of cargo handling and minimization of costs related to transport and thoroughfare. Road haulage costs are the key weakness for the Port of Hong Kong. However, in terms of on-port efficiency Hong Kong is significantly superior to its competitors.

Dubai’s port, Jebel Ali, was developed in the late 70s to supplement the operation of Port Rashid. However, Port Jebel Ali is now considered the largest port in the Middle East and world’s largest man-made harbor.

The strategic geographic location of Port Jebel Ali has made it the most frequented foreign port by the United States Navy. Due to the depth of the harbor and the size of the facilities offered by the port, ships of all sizes and types can be accommodated.

Navigation Channels: The International Navigation Association guidelines were applied for the design of all navigational channels at Jebel Ali and then they were bettered: a two way channel was preferred over the industrial standard in order to cater to the rapidly growing traffic at the port.

Reclamation and Dredging: For Jebel Ali, the reclaimed land volume significantly outweighs the dredged volume due to the geographical location. Future dredging can be done within a 20km radius which will reduce the variable cost.

Port Jebel Ali is considered the 8th largest container terminal in the world, with 13,300,000 TEUs. According to an analysis conducted by HPA, the amount of throughput should be at an estimated 58,380,000 TEUs. The estimated amount was determined based on the current population and economic growth trends within the Emirates.

The cargo storage consists of 109,435 m2 of covered storage and 959,604 m2 of open storage. The port consists of a fully computerized and air conditioned storage facility for the storage of perishables. Proper facilities are available for open containerized cargo such as break bulk, Ro/Ro, dry bulk, petroleum and other liquid bulks.

Apron Area: This is the area on the waterfront side of the pier or wharf where the cargo is prepared for unloading and loading. The apron area should be composed of a five-meter service land, total depth of 80 meters, 15-meter hatch covers, 30-meter crane tracks, and a 30-meter traffic lane. All of which is available at the Jebel Ali Port along with extra depth to provide flexibility.

The Ports of Abu Dhabi, i.e. Khalifa Port, Zayed Port, and their surrounding infrastructure, are facing serious competition from other ports within the region, e.g., Port Jebel Ali, Khor Fakkan, Port Muscat (Port Sultan Qaboos). Driving shipper traffic towards Abu Dhabi to increase cargo traffic will require the provision of superior service and higher efficiency. The successful introduction of the new Khalifa Port and Kizad Industrial Zone is a major milestone for Abu Dhabi’s ports industry and local economy as a whole. The new port has already reached and surpassed  many of its ambitious performance targets and won prestigious awards including the Abu Dhabi Excellence Award for Government Performance-“Best Project/Team Award”, Lloyd’s List –“Port Operator Award”, the Maritime Standard Awards-“Port of the Year”, as well as the “Award for Environmental Protection” at the International Bulk Journal Awards in 2011. Nonetheless, there are always improvements to be made and lessons to be learned.

An efficient model should be developed to ensure increased turnover for dock operations. However, the objective of superior transshipment is not only to reduce the overall cost of distribution and collection of cargo, but also to improve the time-to-delivery and the origin-to-destination movement pattern, and reduce the cost of transit. Abu Dhabi can leverage the benefits of Kizad to ensure the highest degree of logistics and drayage services in the region. Port management can create and implement intricate supply chains to provide high value and seamless intra-modal transfers, which will further increase the efficiency of cargo handling.

Vessels are becoming longer and larger, therefore surplus buoys should be removed to save costs. Extra area should have anchorages relocated for standard sized vessels.

The port should conduct one-hundred percent evacuation exercises to improve emergency preparedness. It should enhance communication to enrich the outreach amongst all involved terminals, institutions, and labor. Further improvements include incorporation of sophisticated techniques related to inspection to prevent any untoward incidents.

Customer Relationship Management: Enhancements and full utilization of the CRM system will help provide a seamless flow of valuable information about every single vessel docked at the port and help determine possible improvements for the future.

Data Assets and information management: The day to day operations of the port generate massive quantities of data which remain dormant and ignored. By creating data management systems, management can trace every single operation which is recorded digitally. Data analytics and data mining can then turn the data into valuable information about port operations and help decision makers determine the optimum way forward.

Waste management teams are an integral part of environmental catastrophe prevention and containment. Many of the vessels arriving at the port are already contaminated before docking and the bunkering process possess a high risk of spillages and leakages. Although it is evident by the numerous environmental protection and clean up campaigns that environmental protection is a key priority for the Abu Dhabi ports, waste management processes at all the ports under ADPC’s control should eventually be streamlined to effectively minimize any harmful effects to the environment and the community.