From humble beginnings in Felixstowe, a weather-beaten coastal town in the UK’s south east, Lemke has been fortunate to have worked in the shipping industry in Mexico, The Bahamas, Oman, Tanzania, Saudi Arabia, and currently, Abu Dhabi.

“Bouncing around to different countries has done myself and my family the world of good, and I’ve been very lucky because ports aren’t always built in the nicest places,” he explains. “The Bahamas probably means the most to me from a personal point of view because it was where my children grew up. Running around barefoot was normal for them. The beach was their playground.” 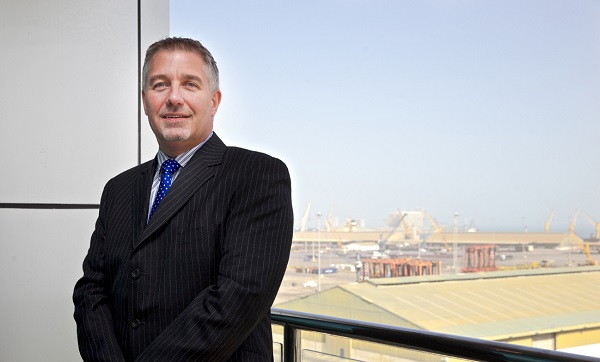 Lemke believes that both his career and family have benefitted from being shipped off from his childhood home in 1996, and says ultimately it’s the catalyst that brought him to Abu Dhabi’s shores.“Travel and culture are two things that shape lives and people,” he added, “and because of this I believe that as an individual, and a manager I am a more rounded person, and certainly my children are also well rounded young ladies!”

“Living abroad is an education in itself; it’s a privilege, and kids who grow up in different countries are exposed to foreign languages and alternative cultures. He explains that his children “often attended local schools, and had a lot thrown at them, much like the working environment.Academics aside, the fact is they are world citizens. I know for sure that what they’ve gained by moving all over the world with us has well out-weighed any academic qualification they could hope for.”

Lemke’s travels have singled him out as the ‘go-to guy’ for ADPC. Basically, whatever Lemke doesn’t know about ports, probably isn’t worth knowing.

“We’re sitting in front of what is the historic gateway port for Abu Dhabi,” he says, gesturing towards wrap-around glass windows overlooking his sea palace. “Zayed Port has been bringing in the majority of the traffic and is the central lifeline for the country – for decades.”

Lemke, a keen fisherman, describes his transition into the shipping industry as an “educated accident”, adding that, “In Felixstowe the port and boat industry is the main line of work, and as a young lad I landed into this operations job in the yard”, he recalls. “It was a varied role for a major shipping company, and after three years I was approached by the port to join them in another operations role as a ship planner.”

Three years on, Lemke was promoted to managing a team of ship planners and yard controllers, and after three successful months he was offered his first overseas project in The Bahamas.

“The roles I started with were all very pivotal positions, and I had to learn about the ‘ins and outs’ from scratch, and that is an education like no other,” he says. “I developed a passion and I was comfortable around boats.” Lemke’s passion unfolds as he reveals a host of information spanning more than 30 years in the shipping industry.

“I once read that there are 12 billion gallons of water moving around the world every year in ship holds to keep them stable. Think about that number,” he politely requests before a pause. “It’s staggering when you consider what we’re doing in this region alone in terms of shipping, you can really start to understand the utilisation of ships all over the world.”

Its Lemke’s deep rooted passion for his profession that fuels his ambition to place ADPC on the world’s map. “The government has invested billions of dollars,” he reveals, “and our focus is to make ADPC the leading port not only in the emirate, but also the region. We want it to be something special,” he proudly explains.

ADPC is a government-owned organisation which was established in 2006 as part of the restructuring of the ports sector in Abu Dhabi. ADPC currently manages nine commercial, logistics, community and leisure ports, including its flagship state-of-the-art, deep-water Khalifa Port. The new port was officially inaugurated on 12 December, 2012 by President His Highness Sheikh Khalifa bin Zayed Al Nahyan and is the first semi-automated container port in the GCC region

“We’re not just a port owner and operator, we are also landlord and regulator and a project development company,” says Lemke. “I moved to the region because it attracted me some years ago. When you look at the GCC countries, each have their own significant development and investment strategies, and it’s impossible to not want to be a part of that.”

“I learn something (new) everyday,” he laughs. “You must never stop learning or trying to learn,” he says amiably, and there is not a shred of arrogance despite his elevated position.Lemke and Khalifa Port are casually on first-name terms as he refers to “her” simply as Khalifa.

“Things have certainly moved on since my days as a young lad in Felixstowe,” says Lemke. “I remember when we got our first PC in the shipping department in Felixstowe, how everyone was so excited. It linked back to a main central system in Watford, just outside London. Nowadays there’s more power in a smart phone than there was in a computer back then, and we’ve come a very long way. Now I can track vessels on my phone if I want to – anyone can, and there are applications for it; you don’t have to be in the business.”

Lemke admits that remembering his roots inspires him to teach others and he is happy to pass on his wealth of knowledge and experience. “When I first started in this industry we did a lot of paperwork, planning ship movements on a big flip board and tracking them with stickers. The principles are still exactly the same but it’s a good feeling knowing that if all else fails, you can rely on good old-fashioned shipyard-taught skills.”

Never complacent in his job, Lemke is always pursuing excellence, and one such plan is to upgrade the number of systems in ADPC by using solution-oriented technology. “Most readily-available technology providers only give you about a 75 per cent solution,” says Lemke. “We want to try and make them at least 95 per cent to really drive efficiency levels. We are constantly striving to expand the technology standards so we stay ahead of the game. Day passes on smart phones, tying in with a lot of government systems, these are just some of the things we are working on.”

Khalifa Port now handles all of Abu Dhabi’s container traffic, general cargo, as well as roll-on and roll-off (RORO) freight, such as cars, vans and trucks. Amongst its state-of-the-art features is the maritime infrastructure, including nine of the world’s largest ship-to-shore quay cranes, 42 automated stacking cranes, 20 straddle carriers and comprehensive information and communications technology (ICT) services. Lemke informs that, “By 2030 we hope to be driving the business to 15 million containers a year.”

At the other end of the scale, Lemke says it’s “rewarding” to serve smaller ports as well as expand the future of Zayed Port. “We manage small ports in the western region with fishing fleets where they’re moving cargo for everyday life. Whilst it’s very exciting to be a part of large-scale cargo improvements, we are also focusing on bringing people to Abu Dhabi.”

Cultural icons including the Yas Marina circuit, the many museums; world-class hotels and facilities are just some of the reasons for visiting Abu Dhabi. “They are building quite a cultural centre. It’s development,” he adds. “All of this is being done so we can attract tourists through our cruise terminal. It’s a very different business offering, and is quite unique for me,in comparison to what I’ve done before.”Port Zayed received the first ship of the season in October this year and the estimated passenger figures for 2014/15 show huge potential.“A new state-of-the-art terminal will be built and as our offerings start to take shape I can only see numbers increasing,” says Lemke.

Last year saw 180,000 foot passengers, with 220,000 estimated for the season ahead. “We’re predicting 300,000 for 2019, which I believe is very conservative. Cruise ships are interesting – a very different proposition than cargo. On a cruise ship each person is cargo and each one has an opinion. You have to manage the cargo very differently.Don’t get me wrong, there is always an agent or company that is capable of complaining on behalf of the cargo. But with passengers it’s a little more direct.”

Lemke, who generally starts his day at 6.45 am, says no two days are ever the same in this line of business. With 550 staff to manage – as well as a number of external bodies –the challenges are endless but worthwhile. “I like ships; it doesn’t matter whether it’s a grubby old container vessel or a fancy cruiser. That was my entry into the industry, I guess I still like doing that and meeting the captains and crew.”

However Lemke feels he has a much bigger purpose. “Looking after ports is a huge responsibility,” he says. “We not only support growth but also drive it. Part of our job is to ensure the port does not become a bottleneck for economic growth, which means we have to predict and stay ahead of the demand. Abu Dhabi has a lot of development planned over the next few years and we need to make sure we allow that development to happen.”

Lemke believes it’s this pressure that makes his job so interesting. “On one hand you’re dealing with passengers, then you’re moving cars, steel, scrap or piping. However far you roll down the organisation, everyone mucks in and has to be willing to give it everything. That includes me.”

Lemke holds an Executive Development Program qualification, completed at IMMD, Lausanne, Switzerland. He has completed Finance for Non-Financial Managers MCE and holds a Diploma in Port Operations and Management from the University of Cardiff.