Sultan Al Jabri is an Emirati visionary.Indeed, whilst his peers were accepting positions with the Abu Dhabi PoliceDepartment, local oil, companies and government entities, Al Jabri had already packed his bags and bid his family farewell.Going to study in the UK was not unusual for young Emiratis – signing up for maritime studies was.“It’s pretty rare to find an Emirati working in the maritime industry,” said a proud Al Jabri. “Actually I think it’s unusual to find an Emirati who trained abroad and then returned to the UAE to serve in the maritime field.” 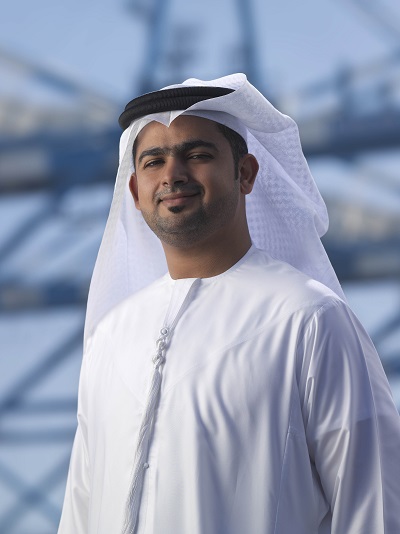 Sultan Al Jabri joined Abu Dhabi Ports Company (ADPC) in 2009 with more than a decade of industry experience as a Port Regulation Senior Manager for the Ports unit. In 2012 he was appointed as Vice President, Regulations, HSE and Security in recognition of his focused approach, leadership skills and enthusiasm.

Despite a rich heritage in fishing, pearl diving, and a general affinity for the water, Al Jabri says people from the UAE shy away from the maritime industry as the job requires them to work away from home for prolonged periods.

“Emiratis are very family orientated, and because of this a career in port management can be difficult. It’s certainly not the kind of job you learn from inside of an office,” he jokes. “In the beginning you are away from home for long periods of time. As part of the job, you are required to work on ships in remote areas for months on end. It takes a certain type of person to accept this, and I appreciate that not everyone can.”

Sultan Al Jabri left the UAE for the colder climes of Newcastle in northeast England. He acquired a Higher National Diploma in Marine Engineering from South Tyneside College,which, in 2001, paved the way for obtaining a BEng in Marine Engineering from the University of Northumbria,Newcastle. “I felt that I needed to gain as much experience as I could,” says Al Jabri. “I didn’t want to just acquire a qualification and thenreturn home. I knew I needed to immerse myself in the industry, and spent six months at a time on ships… and it was hard work!”

On arrival into the UK, Al Jabri and a few UAE friends weren’t sure what they were up against: having to battle with bitterly-cold temperatures, and adjusting to a whole new environment,socially and culturally. As if that weren’t enough, they also had to grapple with trying to understand and make sense of the Geordie accent and dialect! “When we first arrived in Newcastle my friends and I thought people were speaking a different language!” says Al Jabri fondly. “It was so cold,and at times quite tough, but the people there had their hearts in the right place and were very warm towards us. We started going to St James’ Park to watch football, and I’m proud to say I still support Newcastle FC to this day.”

Al Jabri continued to further his education and five years later he graduated with a Master’s degree of Science in Maritime Operation and Management from London’s City University.

“Coming home for the holidays made it easier,” he says. “Of course you get homesick but when I look back I know it was all worth it.”Early conversations with his parents were plagued with confusion and concern, but a determined Al Jabri continued to follow his dream. “My parents are very proud of me and I am very proud of myself to be honest,” he says. “I am considered one of the very rare qualified maritime Emiratis in the region. Even now I get loads of questions from my friends, such as how do you sail at night? Can you see? What if the ship sinks? People have perceptions and I enjoy explaining what I do now.”

“A port plays such a big role in the economy. It’s almost the gateway to prosperity. I see it as my mission to provide good services for businesses in the UAE to grow as well. Without us they cannot expand,” he says.

Today, atADPC, a government-owned organisation which was established in 2006, Al Jabri leads a team across a broad section of more than 100 staff, including Health Safety & Environment (HSE), security, and a wide range of contractors and consultants.“I started as a senior manager and worked hard in different departments,” he says.“I always want to make improvements.”

Al Jabri started at ADPC in a workforce of just 200 employees.At present, the company has grown to over 1,000 employees in addition to outsourced staff. “I really feel that I’ve been part of the journey. I have experienced the growth first hand and it only fuels my passion,” he says. “There have been many challenges as well as good times along the way. I believe the people here enjoy the ups and downs.”

Passion isthe key according to Al Jabri who advises that you must “be happy in order to excel, and passionate about what you do for a living. Not just for yourself, but also to enhance and help others to develop further. Keeping the passion alive amongst my team is my most important daily task. I need to understand what their challenges are; try to open doors for them, help them to think outside the box and allow them to grow with energy. They must be inspired – the ultimate goal is to keep everyone happy!”

ADCP is committed to developing its staff, a mantra which has beenfirmly upheld since inception. In addition to his other titles, since 2012 Al Jaberi also heads the internationally accredited ADPC Maritime Training Centrewhich has developed significantly under his vision and guidance.

Al Jabri believes it has been this on-going support that has seen him grow and says he now aims to do the same for the people he personally manages. “I have been given all the support I could wish for in order to grow and flourish in this business,” he admits. “I was given the opportunity to visit Antwerp for a few weeks to see how another port operates, and recently I sent four of my staff to do the same. It was a big change for them and as well as being a reward. They have returned excited, fresh, and with good ideas.”

Al Jabri’s duties have expanded to include the planning and implementation of policies, procedures, practices, and strategies for ADPC Ports Unit activities, ensuring compliance with all applicable laws. He isAbu Dhabi Department of Transport’s liaison with other government regulatory agencies overseeing ADPC port activities, and represents ADPCatinternational forums.

He believes it is of the utmost importance to benchmark ADPC against other international ports. “It’s easy to get stuck in our ways and believe we are doing everything right when actually we may be able to do things better.”Al Jabri and his team work tirelessly to raise standards across all port departments. He is a respected leader at the helm, and by his own admission he claims that some improvements were needed when he first came on board. “We didn’t have the right strategy, approach, or response to oil spills,” he says. “We have looked into the risks and started to engage with international consultants, and now follow best practices from around the world.”

The right equipment, skilled staff, and correct ‘know-how’ are all responsible for improved standards, according to Al Jabri,who is unwilling to accept credit himself. “It’s a full team effort,” he insists. “Operational services and environmental practises must be better than average otherwise international trade will not come. Our customers are international, and a ship coming from Hong Kong or Shanghai will expect the same standard of service which is provided in Singapore or elsewhere in the world.That’s a big challenge for us.”

“By 2030 we aim to be a key player in the success of the Abu Dhabi economyand together withKizad, the neighbouring industrial zone, to contribute towards a massive proportion of non-oil GDP”. Khalifa Port and Kizad are inter-linked, offering a comprehensive logistics network with optimum supply chain efficiency and connections.

With an initial overall investment of AED 24.2 billion (USD 6.5 billion), Khalifa Port andKizad represent one of the biggest industrial projects ever undertaken in the UAE.In addition to developing Khalifa Port, ADPC is upgrading Zayed Port, the capital’s home port since 1972, to house a world-class cruise terminal.

“People are the most valuable cargo so we will make sure there are more resources for this project,” he adds. “The first phase development of the cruise terminal has already been successfully completed, and this is a very exciting and proud project for me. It is like welcoming people to my home.”

A man with the weight of a nation on his shoulders when it comes to health, safety and regulations, Al Jabri couldn’t be blamed for having developed a permanent state of paranoia.“I don’t expect the worst but I always make sure I’m prepared for it! We continually carry out practise drills and safety exercises andensure that our standards are up-to-date,” he says. “I think I’d live on a knife’s edge if we were not properly prepared, but since we are, then I’m OK. I drive to work relatively fearless. We are ready for anything.”