As the business sector has adopted the use of social media, the use of Twitter has escalated exponentially. Organizationsare now realizing the importance of stayingconnected via socialmedia networks in order to maintain a firm foothold in the market. Private, public, and semi-government organizations are using Twitter more frequently today for various purposes. From the benign to earth-shattering, sharing views and opinions to making significant public announcements; Twitter’s uses are many, as are its benefits.

According to research conducted in 2013 by Q4 Web Systems, a company that specializes in analyzing best practices in social media, of over 800companies included in the survey, 96% have Twitter presence. Thisrepresents an increase of 9% over the previous year.The research reported Technology and Natural Resources sectors as being the most avid users of Twitter.A region-wide analysis showed that North American companies are the most avid users of Twitter, closely followed by their European counterparts.

These trends show just how important it has become for public and private organizations to have a presence on Twitter and make their presence known. Around the world, organizations are making extensive use of Twitter for various public relations and marketing purposes. Some of the most practical and beneficialuses of this technology today are:

More importantlyis the fact that Twitter easily facilitates the collection and feedback of information which client-driven organizations thrive on as the technology enables greater customer contact, which in turn fuels the desire and need for a more imaginative use of the technology.

Forgovernment entities that choose to monitor the effectiveness of social media and digital strategies and campaigns, there are a multitude ofpaid and free tools that can be used to this end. Most tools allow users to search by hashtags, social media account names, or general keywords. Generally, these tools can list all the recent mentions of the search item, as well as sentiments (positive, negative, neutral), the top related keywords used in social media updates, and the most frequent users for search items. Some tools also include dashboards that display how many Twitter accounts have been reached by the organization, how much exposure is generated by calculating the number of retweets, the most retweeted content, and similar statistics.

As with any other public sector investment, it is important for entities to measure the return on investment (ROI) of social media and digital strategies and campaigns. PR and Marketing Managers can use a variety of tools and outsourced services to manage digital content, analyze and measure results, and improve results of their efforts.

As an introduction to the possibilities of the technology, Twitter has created a page that allows media professionals to learn all the tricks of the trade. By visiting https://media.twitter.com you can learn and explore Twitter best practices and success stories with an option to filter by industry, including government, for ideas and tips for successful Twitter campaigns.

Although Twitter does not form as integral a part of social communication in Abu Dhabi as it does elsewhere in the world, there are several public and private organizations that have been making the best of it. The twitter penetration rate in Abu Dhabi is still under 5% of the total population, with an estimated 96,000 users from Abu Dhabi and approximately 480,000 users across the UAE. Nonetheless, Abu Dhabi government entities have begun to make their debut on Twitter over the last few years with some public sector accounts now boasting over 100,000 followers. These users typically use Twitter to stay in touch with local residents and citizens by posting information, news articles, public service announcements and changes, as well as marketing events and public campaigns. Some government entities have also been able to use their Twitter accounts to post questions and conduct quick polls to gain feedback and public opinion on important social and economic matters with measurable success.

The infographic below includes some of the most followed Abu Dhabi government twitter accounts: 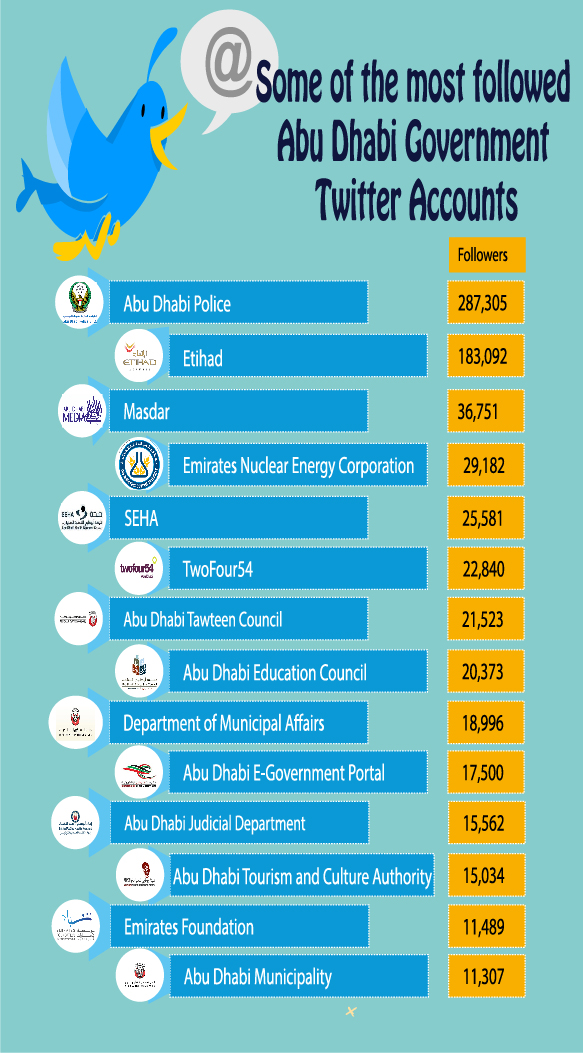 The growing, yet still limited use of Twitter in the Arab world, versus its widespread usage elsewhere, emphasizes the fact that there are still many lessons to be learned Abu Dhabi’s the public sector. Some best practices that might give local companies something to ponder are discussed below: