Public transport, or public transit, is a shared passenger transport service available for use by the general public. Different modes of public transport offer a variety of travel options via buses, trains, ferries, and rapid transit rail (metro or subway).

Public transport, both diverse and expansive,provides a needed servicefor commuters, families, students, senior citizens, and persons with disabilities. When efficiently designed and managed, publictransport systems can expedite growth and development for cities. These systems can reduce the strain on road networks and reduce congestion problems. They can also decrease pollution, road accidents, and other health and safety problems.

How Important Is an Effective Public Transport System?

Public investment in mass transit also has a very positive effect on the creation of sustainable jobs.Better public transport helps employers to access a larger pool of workers with increased opportunities for personal growth and decreased private transport expenses.

The UAE is one of the major oil producers in the world, and Abu Dhabi boasts the largest share of oil production within the Emirates. Abu Dhabi’s ambitious plans for increasing oil production to 3.5 million barrels a day by 2017 would further benefit from energy conservation and reducing local oil consumption, thereby increasing the amount available for export.

Since the turn of the century, more attention is being paid to rapid environmental changes. The secret to fast-paced economic growth and development lies in a highly-developed,well-utilized publictransport system. However, this is the area wherein Abu Dhabi faces its greatest challenge.We must change public opinion about using public transport for routine commuting; this trendhas not yet been fully embraced by the residents of the city.

Both the Emirate of Abu Dhabi and the city have seen phenomenal growth in population: from 58,000 in 1952 to an estimated 2,210,700 in 2012. Such a massive increase strains the transport network.With the population expected to continue to grow, increased public spending for a publictransport infrastructure would not only take the pressure off the already-overloaded road networks, but would also provide easier access to workplaces without traffic congestion, ultimately reducing road-related accidents and increasing convenience for commuters.

The publictransport system in Spain is considered one of the most developed and well-integrated systems in the world. The Spanish capital Madrid, boasts a widespread transport system, including 13 metro lines, over 130 bus lines, and 10 local train lines. The system efficiently connects the centre of the city with the suburbs, and is both highly affordable and costeffective. The buses, metro, and trains areclean and convenient modes of travel in any part of the city.

Recently, a member of the Abu Dhabi Executive Council, H.E Sheikh Sultan bin Tahnoon Al Nahyan, (Chairman of Transport Authority) visited Madrid to discuss Public Works and Transport. The Department of Transport (DoT) of Abu Dhabi has identified Madrid’s public transport as a model to benchmarkin the coming years. Particularly, Madrid-style bus and metro systems will be implemented in Abu Dhabi to provide better public transport forresidents.Madrid’s metro, buses, and commuter trains run frequently to facilitate public transit. Abu Dhabi aims to operate a similar system, particularly for buses and the metro, to reduce traffic congestion in the city. It hopes to provide a comfortable experience to encourage more people to travel,primarily via public means.

As one of the oldest systems in place, the publictransport system in Germany is highly efficient andutilizes a wide network of buses, trams, trolleys, and underground trains, and offersits commuters a comfortable and affordable means oftransport. 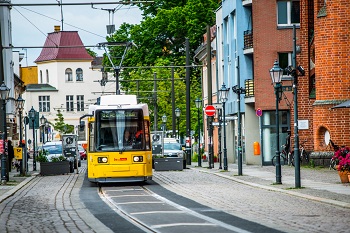 The underground metro system, the U-Bahn, is particularly famous for its efficiency and timely schedules and is well connected to the railway system, the S-Bahn, and other transportation routes throughout the city. 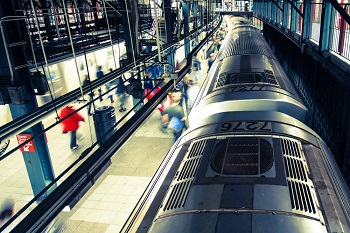 With a total population of approximately 8.3 million, New York City is constantly growing. The region’s railroads, subways, parkways, thruways, expressways, and highways were built to transport people and goods into and around the city. As a result, it has the most extensive mass-transit network in North America. Data from the 2000 US Census reveals that over half of New York City households do not own a car; this figure is even higher in the borough of Manhattan (around 75%). Although over 90% of Americans drive vehicles to work, mass transit is the primary form of travel for New Yorkers. This uniquely high rate of public transit makes New York City the most energy-efficient city in the world.

In 2007, New York City MayorMichael Bloomberg released the PlaNYC, an initiative to strengthen the economy and infrastructure, combat climate change, and enhance the quality of life for all New Yorkers.

The PlaNYC introduces sustainable forms of mass transit by innovative programs that have been successfully implemented elsewhere. The Solar Sailor—a hybrid ferryrunning on solar, wind, and diesel energy—is one such initiative. It is currently operational in both Sydney and California and has proved successful and energyefficient.The Bike Share program is another trending publictransport program adopted under the plan. The program is a technologically enhanced version of free public bicycles. Program members can pick up bicycles by swiping their membership card at designatedkiosks and returning the bicycle toanother. Similar programs in Barcelona and Paris have been highly successful.Tramcars or street cars have been introduced as a viable option due to significantly less infrastructure requirements. Other successful implementations can be seen in Goa, India, and in Dresden and Wuppertal, Germany.Real-time information screens are to be introduced at all stations along with mobilephone apps and interactive text messages to provide time-sensitive information to public transport users and improve efficiency.

The PlanNYC also includes numerous considerations for accessibility. Wheelchair-accessible subways and trains will accommodate the disabled, and Universal Access Turnstiles will replace the typical bars, making public transport more accessible for commuters in wheelchairs, using crutches, pushing strollers, and those who have injuries or other special needs.

The Seoul Metropolitan Government currently has the most advanced publictransport hub in Asia. The transportation boom traces its origins from the era of the Korean Empire, when Seoul and Incheon were linked by railroad and the first street car lines were laid. The Seoul Metropolitan Government takes public transport seriously, as evidenced by numerousimprovement initiatives beginning in the early 21st century. 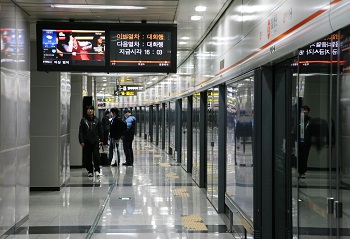 Seoul restructured its bus route in 2004, replacing the previous routes with a hub-and-spoke dual system of trunk and feeder lines.The city also introducedan exclusive median bus lane, another major milestone contributing to the success of the publictransport system. Since then, the bus system has become much faster, and currently the network covers a total of 115.3kms with plans to expand to 210.5kms in the coming years. Since the implementation of the median bus lane, bus speeds have increased by an average of 30%, making public transport the moredesirable option for Seoul residents.

Another successful initiativeby the Seoul Metropolitan Government was the integration of all public transport into a transit farecard system covering the entire Seoul metropolitan area, considerably lowering transportation costs.The transit fare card is called the T-Money, a form of digital currency used to pay for various transport services, and can also be used in lieu of cash or credit cards in some convenience stores and other businesses.

In addition to South Korea’s environmentalsustainability policies and objectives, the Seoul Metropolitan Government began operating electrical buses in 2010 to lessen exhaust and noise pollution. Also worth noting is TOPIS, Seoul Metropolitan Government’s integrated transportation management centre which collects and delivers information to the city’s traffic management system. This act has drastically improved road and publictransport management. The Seoul public transport system has proven that collaboration between public-sector entities can lead to great results.

What Can Abu Dhabi Do?

To improve its publictransport system according to theseinternational standards, Abu Dhabi must make important changes to its existing transport network. Some possible practices that can be observed by the government are:

Increasing the Number of Transport Services

Currently, the transport system in Abu Dhabi is dominated by private cars, preferred by commutersfor comfort and accessibility. This emphasizes the need for the DoT to increase transport services generally—and the number of buses in particular—and enhance overall accessibility to public transport in the city. Since a network of well-connected roads already exists in the city, the use of buses is the most viable area of development.

In lieu of this fact, the DoT has recently added nine new bus services to its publictransport network. It has also rerouted and extended several existing routes, changing stops and frequencies to upgrade the entire system. The initiation of the Dalma Mall road projects has significantly impacted the public-transit system and current changes.

With Madrid as an international model of public transport, Abu Dhabi must ensure the implementation of a fully functional metro system to develop its public transit. The city has already enacted plans to introduce Metro and Light Metro projects to meet the demand for increased mobility, which is expected to increase five-fold by 2030.

The Abu Dhabi Metro system should considerably reduce traffic congestion on highways and connect the city to various suburbs such asSaadiyat Island, Al RahaBeach, and Yas Island. The ticketing system should be user friendly, and routes must connectto various parts of the city and link with other transportation routes for better accessibility. These changes are important to successfully replicatesystems like the Metro and Light Metro plans in Madrid.

If the government is to fully embrace an efficient publictransport system, it should ensure the various transit mediums provide both convenience and comfort for commuters.  Without these two major factors, the trend towards public transport may not be realized.

Sincetheir introduction in 2008, the bus systems in Abu Dhabi have not been operating up to expectations. Many bus shelters are not yet operational, while others are simply locked or temporarily unavailable. The high temperature in the city also dissuades many from using public transit. With our climate, it is necessary to provide air-conditioned buses and bus stops. Lack of climate-controlled facilities causes current users of public transport to seek other alternatives and makes attracting new users even more difficult.

Changing perceptions among middle to high income earners is a probably one of the biggest challenges in promoting the useof public transport in Abu Dhabi. In a city where car financing, gas, and parking prices are still considered extremely cheap compared to the rest of the world, it’s going to take a lot of effort to convince residents to get out of their cars and hop on the bus or metro. Nevertheless, if the existing and future public transport services are marked by efficiency, comfort, and reliability; and the right messages are communicated to the public, residents are bound to change their perspectives sooner or later.