Robotics: The Rise of the Machines

Robots have both enticedand alarmedus for generations. The idea that we might be able to create machines that are smarter, faster, and more effective than humans has proven irresistible. Futurists and innovators have long predicted the rise of the machines, a world in which robots perform a variety of functions so humans can focus their energies elsewhere.

In fact, robots have been a reality on factory assembly lines for at least twenty years, though it is only relatively recently that robots have become advanced enough to enter into home and office settings. While the quickly advancing fields of automation and artificial intelligence will most certainly revolutionize every aspect of human life, impacting everything from military strategy to medical procedures, the future of robotics doesn’t have to be a daunting one. Rather, as robots take over more complex tasks, new forms of man-machine interaction will emerge and humans will evolve to accommodate this emerging and symbiotic relationship.

The Future Is Now!

Nowadays, robotics is applied in almost every facet of our daily functions. Commercial robotics includesfactory-operatedmachines that can build and demolish and there are household machines that can help with cleaning, gardening and small-scale building. The advent of driverless cars is also an interesting concept in engineering. They aim to create safer roads and avoid accidents due to human failures by utilising navigational software to be as efficient as possible.

Here are some impressive examples of robots working amongst us today:

Always at the forefront of innovation, Google has acquired around seven robotics companies are building themselves to be a serious contender in the worldof robotics.Schaft Inc., one of the companies acquired, built an award-winning disaster response robot that can function in difficult terrain, climb ladders, and clear debris. Another notable acquisition is an army of futuristic bipedal humanoid robots by Boston Dynamics.

iRobot is a company that has created multiple droids to aid in public service. Theserobots are capable of assisting with bomb disposal, first aid response, and reconnaissance. One notable creation is the iRobot 710 Kobra, which can lift up to 330 pounds and navigate with a speed that is extremely impressive for an automated robot.

Today, medicine is at the forefront of man-machine advancement. Remarkably, surgical robots are nowcapable of performing with greater precision than an unaided human surgeon. Researchers are alsodeveloping advanced exoskeletons for the disabled as well as similar devices designed to help paraplegics walk.

Amana Healthcare has introduced VGo (robotic telepresence) to enhance doctor-patient interactions and the overall hospital experience. VGo gives renewed hope to children with geneticabnormalities and creates a “telepresence” for patients who cannot have their family at their bedside at all given moments. It works through the VGo robot and VGo app that combine audio and visual capabilities togive patients a sense of normality, the VGo is even capable of helping hospital-bound students continue in education and interact with their fellow classmates.

Robots have been lending a helping hand in the manufacturing and industrial sector for quite some time now. The only difference is now, robots have become less reliant on human supervision. Abu Dhabi’s KhalifaPort, that is almost entirely automated is an impressive example of independent robotics succeeding in the workplace.

Since the UAEhosts some of the busiest cargo hubs and industrial facilities in the region, a little help from robotic employees would definitely be a positive approach to improve efficiency. Watch this space!

Yes. You can have your own robot too! Apart from the popular robotic vacuum cleaners, robotic companions (pets), robotic appliances and robotic toys, you will soon be able to purchase a robot that will be able to help you out with more complex chores like dish washing, cooking, redecorating and even helping the kids with their homework!

The advent of the aforementioned Telepresence is also experiencing a huge increase in demand from professionals and businesses alike.  Need to go away on a business trip? No problem. Your telepresence robot has you covered. Telepresence can actually give you a physical presence at work or school when you can’t be there in-person. It also allows you to keep updated in real time through the use of a motorized robot that displays your face on a screen!

From NASA’s Robonaut 2 and the legendary Curiosity Robot roaming Mars, to heat resistant robots used by the US fire department to climb stairs and generate 3D images interiors, public sector robots have been utilised by governments for quite some time with increasingly effective results.

Robots have a significant presence in Europe too and the European Union’s ROBINSPECT program are developing an unmanned robot that detects cracks in tunnelsand further advancements in disaster prevention.

Asia has often been renowned for its work in robotics. An interesting example being inKorea where developers have built a group of robots that locate and and kill harmful jellyfish, thereby replacing the need for chemical agents that damage the ecosystem.Another case isin Japan, where specialised robots have been programmed to help out with nuclear disaster issues and assist in their prevention.

The Future of Robotics

The multibillion-dollar global market for robotics, long dominated by industrial and logistics uses, has begun to see a shift toward new consumer and office applications. There will be an estimated $1.5 billion market for consumer and business robots by 2019. Here are some of the key trends and predictions that are shaping the future of Robotics:

1. The market for consumer and office robots will grow between of 17% between 2014 and 2019, seven times faster than the market for manufacturing robots.

2. The evolution of smartphones and tablets has made it easier to develop robots for consumer and office applications. Mobile devices offer designers the opportunity to “outsource” computing and user interface tasks to companion devices, allowing developers to produce app-controlled robots at more accessible price points.

3. The ‘Internet of Things’ network (14.8 billion as of February) will grow to 50 billion by 2020, according to Cisco, furthermore Intel predicts there will be 200 billion Internet-connected “things” in 2030.

4. Image, speech, and voice recognition will advance to near 100% accuracy by 2025, according to the latest published research.

5. Nearly three-quarters of executives surveyed by Accenture said that within the next three years, companies will need to invest as much on training their machines as training their people.

There’s no denying that advances in robotics and artificial intelligence will replace some jobs performed by humans today. But for every repetitive job that is lost to automation, it’s likely that more interesting, creative jobs will take their place, jobs that only a human can do. 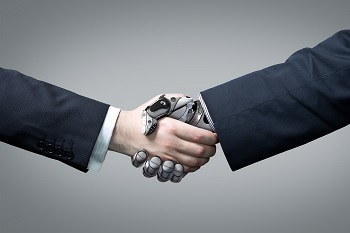 Organizationsshould explore how they can best combine the creativity and experience of their human workforce with the advanced capabilities of robots. Developing scenarios and strategies to introduce robots to your business model could be very beneficial and give businesses a clear head start. Looking for certain tasks that could be enhanced and perhaps simplified with human-robotic communications is a great place to start.

Last but not least, get used to the idea, because the robots are coming! Who knows? There could be a robot working with you sooner than you expected!