How UAE’s Energy Market is Fairing…

The United Arab Emirates (UAE) was the world’s sixth-largest oil producer in 2014, and the second-largest producer of petroleum and other liquids in the Organization of the Petroleum Exporting Countries (OPEC), behind only Saudi Arabia. As the prospects for major new oil discoveries in the UAE are low, the UAE is relying on the application of enhanced oil recovery (EOR) techniques in mature oil fields to increase production.

To help meet growing internal natural gas demand, the UAE has increased imports from Qatar and plans to further increase domestic natural gas production. However, the UAE’s natural gas has a relatively high sulfur content that makes it difficult to process, making it difficult for the country to develop its extensive reserves.

Using EOR techniques, the government plans to expand production 30% by 2020. EOR is an expensive process, and at current prices, these projects may not be economic. The Upper Zakum oilfield is one field that has been targeted for further development. The field is the second-largest offshore oilfield and the fourth-largest oilfield in the world. It currently produces about 590,000 barrels per day (b/d).

The UAE has almost the highest rate of energy consumption per person in the world. To offset this ever- growing strain on local natural resources, the UAE government has recognised the importance of focusing on renewable and alternative energy sources to build a sustainable economy in the future. The country aspires to become the hub of renewable energy and sustainable technologies in the coming few decades.

As of 2014, renewable en­ergy is cost-competitive in the country for the first time – and possibly even the cheapest source of new power supply. Based on current incremental energy prices, the UAE could achieve at least 10% use of renewable energy in its energy mix by 2030 (and 25% in its power genera­tion mix) with estimated net savings for the economy of USD 1.9 billion annually. This is before considering health and environmental benefits or the potential to export hydrocarbons liberated from domestic consumption. The country’s pioneering push into renewables – based on longer-term, ‘patient capital’ goals like economic diversification, sustainability, and job creation – can now be justified by short-term economics.

The UAE’s largest push in incremental energy supply is its USD 40 billion investment in 5.6 GW of civil nuclear e 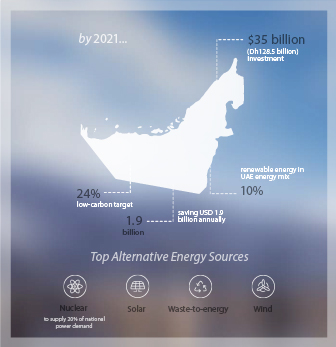 nergy, with one 1.4 GW reactor coming online each year between 2017 and 2020. The plant is expected to meet around 20% of national power demand and eliminate a commensurate amount of gas demand and greenhouse gas emissions. The Abu Dhabi government initiated the project in light of concerns about gas dependency and climate change. The project has been recognised by the International Atomic Energy Agency (IAEA) for its transparent development approach.

As for renewable energy, this sector is on an upward trajectory. Power generation has been the main focus of activity, led by solar, waste-to-energy, and wind, although there are pilot projects in thermal cooling and transport fuels. Solar power in particular has been the primary focus of UAE renewable ef­forts to date. Abu Dhabi saw the commissioning of the 100 MW Shams 1 CSP plant, the largest-ever renewable energy project in the Middle East, and Dubai inaugu­rated 13 MW of solar PV as the first phase of the even­tually 1 000 MW Mohammed Bin Rashid Al-Maktoum Solar Park in Dubai. In August 2014, Dubai issued a tender for 100 MW of PV, also in the Park. The results of the tender, published in November 2014, broke world records for cost-competitiveness, with the lowest bid at US 5.98 cents per kWh and many below US 8 cents per kWh. Some 10+ MW of rooftop PV is also scattered across the country, and may expand further with new metering regulations in Dubai and approval of wiring regulations in Abu Dhabi.

Generally speaking, solar PV is increasingly seen as the most attractive technology in the UAE in the near-term due to cost and resource availability. CSP with thermal energy storage, however, remains attractive for its po­tential to provide base load power.

Other notable renewable energy initiatives come in the form of investments in wind energy along coastal areas of the UAE. These initiatives focus on commercial quality wind resources, transport fuels, or biofuels as well as renewable cooling and waste-to-energy projects that could see the UAE’s waste turned into energy that could fuel industrial processes across various sector.

The UAE is leading the Arabian Gulf region in renewables projects, driven by ambitious targets to diversify the energy mix in Abu Dhabi and Dubai.

The UAE’s investments in green energy will reach $35 billion (Dh128.5 billion) by 2021 as the country aims to reduce its reliance on natural gas for power generation, according to Suhail Al Mazroui, the Minister of Energy.

Some of the $35 billion investments have already been put in nuclear energy, solar energy, and other forms of green energy, while the remaining sum will be invested over the next five to six years.

In the UAE, Abu Dhabi is leading the renewables drive with a target to derive 7 per cent of its energy from renewables by 2020. The capital is also home to the International Renewable Energy Agency (Irena), the multilateral organisation set up in 2009 to promote renewables. Abu Dhabi has also set up the green-energy organization Masdar, which is building a low-carbon, zero-waste city and has a number of renewable energy projects in the UAE and abroad.

The Masdar water program is one of the biggest and most important initiatives in the region. It looks at water conservation as well as possibilities to use new fresh water sources. With water currently obtained from desalination, the issue is that oil is used to power the desalination. The project looks to research how renewable energy can be used to power desalinated water.

Geothermal Gets the Go-Ahead

Masdar is planning to build a geothermal energy facility in Masdar City. The project will cost around $11 billion. When completed, the geothermal power plant will generate 5 MW for powering the city’s 5 MW air conditioning system.

A World First in Abu Dhabi…

Hydrogen Power Abu Dhabi (HPAD) is a joint venture between Masdar and BP with stake of 60% and 40% respectively. It will be the world’s first commercial scale hydrogen fuelled power plant utilising CCS (Carbon Capture and Storage) and fossil fuel feedstock. The project will cost around $2 billion that will fulfil more than 5% of Abu Dhabi’s power requirement. The Hydrogen power plant will also generate more than 400 MW of low carbon electricity through conversion of natural gas into hydrogen and CO2.

The Sun is Sustainable!

Masdar in cooperation with foreign companies has established Shams 1, a 100MW solar power plant in Western Region of Abu Dhabi. Shams 1, which generates enough electricity to power 20,000 homes in the UAE, is Masdar’s second solar plant, after launching a 10MW solar photovoltaic (PV) power plant to provide electricity to Masdar City, with excess power fed to the Abu Dhabi grid.

Down the road in Dubai, the emirate is building the Dh10bn Mohammed bin Rashid Solar Park, which is forecast to generate 1,000MW. The first project in the park is a 13MW solar PV plant, the biggest such facility in the Middle East and North Africa, according to Dubai Electricity and Water Authority (Dewa).

With the recent start on the fourth nuclear reactor at the United Arab Emirates’ Barakah power plant, the Emirates Nuclear Energy Corporation (ENEC) nuclear ambitions are well on their way to being realised, aiming to deliver power to the UAE by 2017.  By 2020, 25 per cent of UAE electricity demand is expected to be met by nuclear energy.

The UAE currently generates 100 per cent of its e 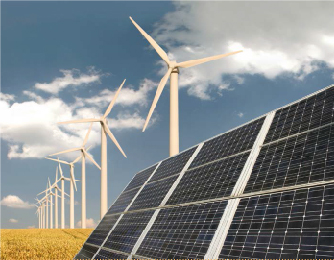 nergy from natural gas, and aims to reduce the figure to 70 per cent by 2021. The UAE is also looking to activate new fields currently under development with Adnoc (Abu Dhabi National Oil Company) that will supply more gas, as well as to expand the country
’s options in terms of importing gas and expanding LNG. The remaining 30 per cent of energy generation will come from nuclear energy, which will contribute 20-25 per cent (5,400 megawatts) by 2020, and solar energy.

In terms of going green, the United Arab Emirates has announced a target to significantly increase its share of low-carbon energy over the next few years.

Through its submission to the United National Framework Convention on Climate Change (UNFCCC), the United Arab Emirates (UAE) announced its target to achieve 24% of low-carbon by 2021. The target is central to the Intended Nationally-Determined Contribution (INDC) that all countries were required to submit by 1 October this year in the run-up to the Paris climate change summit.

As far as adaptation measures are concerned, the UAE will take initiatives in waste management, water conservation and desalination, wetland and marine environment conservation, after having already launched a process to build an inventory of greenhouse gas emissions.

Towards a Sustainable Future

It is evident that the UAE is taking the right steps towards a more sustainable future with innovative and progressive green initiatives such as the water programme in Masdar and the effective harnessing of solar power with Shams 1. The established IRENA headquarters also signals that the UAE is striving to continue to make the planet a more inhabitable place for future generations, and with rising costs of natural gases, a focus on green energy will also be financially effective.